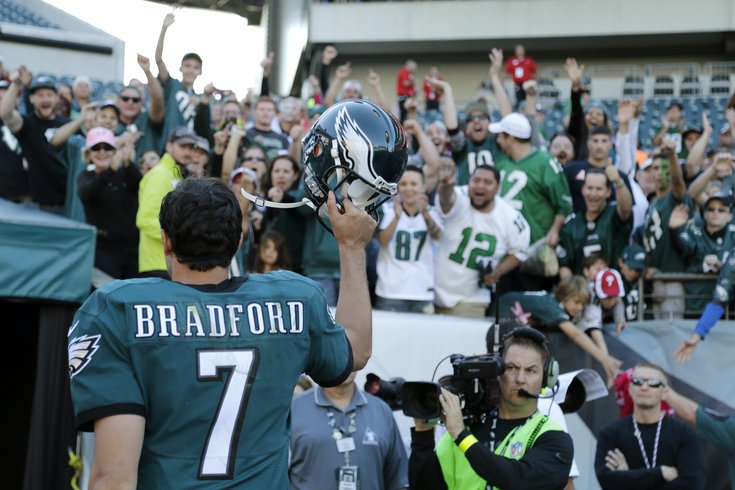 Maybe Chip Kelly was right about what had been plaguing the Eagles through the first four games of the season. Because in their 39-17 win over the Saints on Sunday, his team was able to execute — on both sides of the ball — and looked dominant for much of the afternoon.

However, a 22-point win over New Orleans doesn’t mean they’ve fixed all their problems. Far from it.

One of the Eagles biggest problems this season has been the inability of the offensive line to create any sort of running lanes for their backs. Against an incredibly soft Saints front seven, the Birds made it look easy. But that’s just one problem area for the Eagles.

I don’t want to be that guy, but this win isn’t something to get overly excited about.

In a division that’s still WIDE open, that may be enough to make the playoffs. But the team needs to continually improve, a notion that certainly isn’t lost on the players.

“Obviously, the win is nice,” quarterback Sam Bradford said after the game. “The big thing for us and this team is just to build on this. By no means are we where we want to be as a team, but I think today was a step in the right direction. And I think if we can continue to build on these, then hopefully in three, four, five weeks, we’ll be in a better position.”

As for running back DeMarco Murray, who had his best game of the season after voicing frustration over his lack of carries a week ago, he acknowledged postgame that this was “just one game.” However, he believes the Eagles will continue to improve.

“There’s a lot of new parts to this offense,” Murray said. “There’s a lot of guys who haven’t run this offense in the past and a lot of guys who are new, that are starters now. So I think everyone’s continuing to get a feel for each other, but I think gradually. You have to be confident, you’ve got to continue to work hard and do the little things right, and that will roll over into big things for us and make us play well.”

Both Bradford and Murray are taking the right approach, at least publicly, following their second win of the season. And while there’s suddenly reason to believe the Eagles can make the playoffs, it should be more of a cautious optimism than anything else. As many fans learned the hard way after the preseason, the higher your expectations climb, the more it hurts when they come crashing back down on you.

Now that you’ve been fairly warned, here are the five reasons the Eagles beat the Saints.

1. The Saints are terrible

I hinted at this earlier, but this is far and away the No. 1 reason for the Eagles’ success on Sunday. The Saints are 1-4 — with their only win coming last week against the Cowboys in OT. And their weaknesses, mostly on defense, played right into the Eagles strengths.

Just imagine what the scoreboard would’ve looked like had Bradford not thrown those two interceptions in the end zone. The Eagles finished with 79 offensive plays after getting off just 51 against Washington in Week 4. They also posted 515 yards of offense — 300 in the first half, almost matching their total of 320 yards from a week ago.

As for the Saints’ strengths, namely Drew Brees because they don’t have much else, well, let’s just say Fletcher Cox took care of that…

3. The RBs got some lather

After struggling through his first three games as an Eagles, DeMarco Murray had his best game of the season Sunday, although it wasn't anything close to what he became accustomed to last season in Dallas.

When Kelly was asked earlier this week about getting Murray the ball more, he said that everyone on the offense needed more touches, meaning that the team needs to run more than the 51 plays it ran last week in order to be successful.

And against the Saints, Kelly proved to be a man of his word, as all three running backs saw some action -- including a season-high 20 carries for Murray. They were all very much involved in the passing game as well. Here's a look at their numbers:

"I was able to get into a little rhythm," Murray said after game. "Ryan [Mathews] did a good job. Sproles came in and did a good job as well. And like I said, the offensive line played extremely well today and I think all of us were able to get in a rhythm."

4. Offensive line got some help

Speaking of the offensive line...

Don't get me wrong, they played much better today than they have in recent weeks. So much so that their QB referred to their play as "phenomenal."

And while part of that could be due to the fact that they were facing a Saints defense that allowed the sixth-most rushing yards in the NFL heading into the game, it may have also been aided by the use of more two tight end sets.

The Eagles also ran from under center more this week than they had been, and although it seemed like they were tipping their hand to the Saints' D -- they ran every time Bradford lined up under center -- it didn't much matter.

Still, it was an overall improvement for the banged-up line, one that they'll need to make sure carries over into next week if they hope to beat the Giants.

It's a good thing the Eagles were able to pull away from the Saints in the second half. Had that not been the case, Bradford would have been squarely in the crosshairs on Monday morning, due in large part to the pair of interceptions he threw in the red zone.

The first pick, by Saints CB Brandon Browner, was a terrible throw by Bradford. He had Riley Cooper wide open on a fade to the back corner of the end zone and instead of floating the ball and letting Cooper run it down, Bradford tried to force it in on a hard pass. It wasn't the right move, and Bradford acknowledged that after the game.

"The first one, I just missed the throw," Bradford said. "It was behind him -- can't miss that one. I've just got to put it by the back pylon and let him go get it. The second one, I think the kid [Delvin Breaux] made a good play."

Aside from those two miscues, however, Bradford looked the best he has since the second half of the season opener against Atlanta. And it was a good sign to see how the former No. 1 overall pick bounced back to play turnover-free football for the remainder of the game.

"Obviously you don't like to throw interceptions," Bradford added. "But when you do, you've got to just forget about them and move on. I thought our guys did a great job of just continuing to battle. It would be easy to fold up and say, 'Oh, man. Sam's throwing interceptions. We're done. We can't do anything.' But that's really not how it went today at all. We just kept going, kept moving forward. I'm just really proud of the way we came out and finished in the second half today."

Of course Bradford, like Eagles fans, would prefer those turnovers never happened in the first place, but it was nice to see Bradford steadily improve throughout the game. He finished 32-of-45 (71 percent) for 333 yards with two touchdowns and two interceptions. He also completed passes to nine different receivers, six of whom caught three or more passes.

After the game, his coach seemed equally as pleased with how the QB was able to put his early mistakes behind him and move on.

"I though he did a good job [responding after the two interceptions]," Kelly said. "That stuff's going to happen, but a lot of it is your response after it. We're all going to make mistakes. And when you make them, do you continue to dwell upon it or do you learn from it? If you get put in that situation, you need to put the ball in the right spot. I thought he did a nice job. I thought he bounced back after them."