Flyers and Sixers power ranking roundup: Sixers starting to get some respect 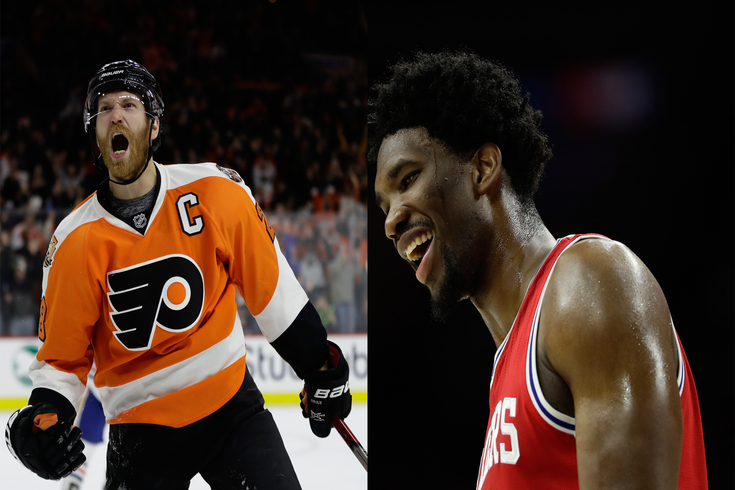 Another week, another batch of power rankings for everyone to get angry about. The Flyers have been treading water over the past seven days, while the Sixers surprisingly ran into a nice little hot streak (well, at least for them).

The Flyers got a loser's point on Sunday after picking up a win against Tampa Bay on Saturday as they try to emerge from the funk into which they fell after winning 10 in a row in December.

Remember back in mid-December, when the Philadelphia Flyers won 10 games in a row? Things have not gone so well since. An overtime loss to Columbus on Sunday dropped Philadelphia to 2-7-1 in the 10 contests since their streak ended. Now a .500 team (21-15-6), Philly sits in the final wild-card slot in the East and needs to find a way out of its tailspin lest it drop further.

The schedule gets tight for Philadelphia starting Saturday, when they begin a stretch of six games in nine days before they get their five-day bye week. Four of their next six games are on the road, where the Flyers are 8-9-2.

Rich’s Take: With three points over the weekend (including an overtime loss in red-hot Columbus), you could at least argue that the Flyers are at least back headed in the right direction. It would be nice if they could rack up some points in this critical stretch (at Buffalo, vs. Vancouver, at Boston, at Washington) before their bye week.

Robert Covington hushed the home fans who've been giving him a rough ride lately with the game-winning bucket to beat Minnesota by a deuce and seal the second win in the Sixers' current 3-1 boomlet. The rest of the news in Philly, rather predictably, centers around Joel Embiid, who recently became the first Sixers rookie to post 100+ points and 25+ rebounds over a four-game stretch since Allen Iverson in November 1996. The Sixers are quietly 7-7 when Embiid scores at least 20 points ... and have not-so-quietly matched last season's win total already thanks to Sunday's matinee triumph in Brooklyn.

The Sixers have won three of their last four games to become the first team to match last season's win total. They rank fifth defensively over the last five weeks and have been at their best on that side of the ball (allowing 100.7 points per 100 possessions) with Nerlens Noel on the floor. He has pushed Jahlil Okafor (three DNPs in the last four games) out of the rotation, which is probably the preference of Sixers fans. Joel Embiid got a standing ovation for a trip to the free throw line on Tuesday, because he and Noel passed the ball to each other.

The Sixers beat the Nets, now Joel Embiid thinks the Sixers have a chance to make the playoffs. #NBAVOTE.

Uh, guys? The Sixers have won three of their last four games. Like, actual NBA basketball games. Please get water and supplies and head to the nearest shelter. This is not a drill.

Ben Simmons, the No. 1 overall pick who underwent foot surgery in early October, participated in a portion of the Sixers’ shootaround before Friday’s game against the Celtics – his first road trip with the team. Coach Brett Brown has yet to give a definitive timetable for Simmons' return, as the 76ers continue to err on the side of caution, but his increased participation is an encouraging sign.

Rich’s Take: If you simply look from December 1st until today, the Sixers are 19th out of 30 teams in net rating. That number is better than teams like the Bulls, Magic, and tomorrow’s opponent, the Knicks. The Sixers still have a ways to go before we can start talking about playoffs (cough, Joel, cough), but this has just been a run-of-the-mill below average basketball team as of late. And considering what we’ve seen the last few years, you bet that counts as progress.