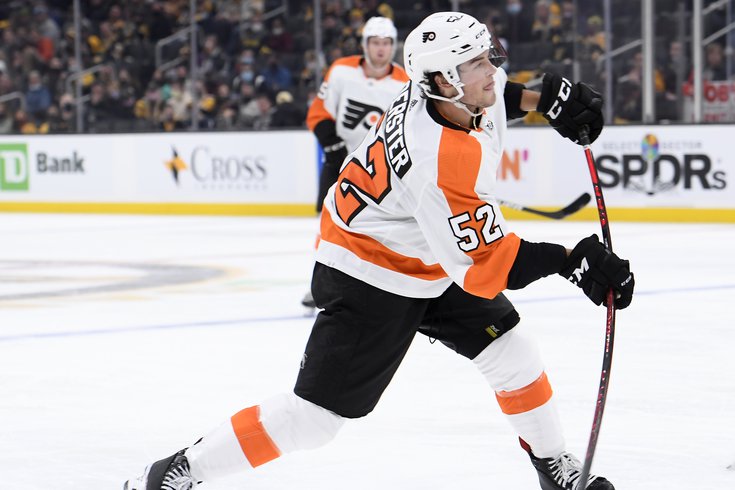 Flyers rookies will begin on-ice sessions Thursday in the lead-up to the team's training camp.

The Flyers announced their rookie camp roster and schedule on Thursday, consisting of practices and two games up in Allentown against the New York Rangers' prospects through Sunday.

After that, training camp will open a few days later on Thursday, September 22.

The rookie camp roster is highlighted by names like Tyson Foerster, Zayde Wisdom, Elliot Desnoyers, and Egor Zamula, who are all promising names within the organization's prospect pool but have had injuries within the past couple of years slow their development.

Wisdom (shoulder), spent last season with his junior team in Kingston, putting up 38 points through 43 games in his age 19 season.

Foerster (shoulder), was the club's first-round draft pick in 2020, and on the international stage at World Juniors this summer, put up six points (three goals, three assists) in seven games for Team Canada.

Desnoyers (hip), a fifth-round pick in 2020, put up 88 points captaining Halifax in the Quebec Major Junior League through 61 games last season and was also a part of Team Canada's World Juniors roster as a 20-year old.

Zamula (back, lower-body), a 22-year old Russian defenseman who was signed as free agent in 2018, had 29 points down in the AHL's Lehigh Valley last season and appeared in 10 games for the Flyers, but went minus-6.

He did show flashes at the NHL level though and should be in the running for a roster spot when training camp begins.

"I think he’s done a pretty solid job getting better, getting stronger and making his way to the NHL," defenseman Ivan Provorov said during his exit interview after last season. "We didn’t get to play too many games together, but when we did, it felt good. We talked on the bench in Russian and we’re able to communicate well on the ice. I think he’s done a great job so far and hopefully he continues to grow and is able to earn a full-time spot next year."

Also on the rookie camp roster are Jackson Cates – and his brother Noah – and Ronnie Attard, two of the Flyers' college signings late last season.

Bobby Brink, who was also signed out of Denver, is out because of a torn labrum in his hip, and Cutter Gauthier, who the Flyers took with the fifth overall pick at the draft this summer, won't attend because of his commitment to Boston College.

You can check out the full roster HERE.

The rookie camp schedule is as follows:

Most of the Flyers have already returned to Voorhees and are skating again ahead of new coach John Tortorella's first camp next week.

For numerous reasons dating back to last year's disastrous season, stock on the Flyers is woefully down, and Tortorella's comments last week on "major concerns" over the team's locker room culture haven't exactly helped matters.

On Monday, center Kevin Hayes met with the media and talked about the importance of culture change and a need for greater accountability.

"I know fans are kind of down on our team right now, but, it's easy to say, but it's a new year new team and I think we're off to the right start with our whole team being here pretty early.