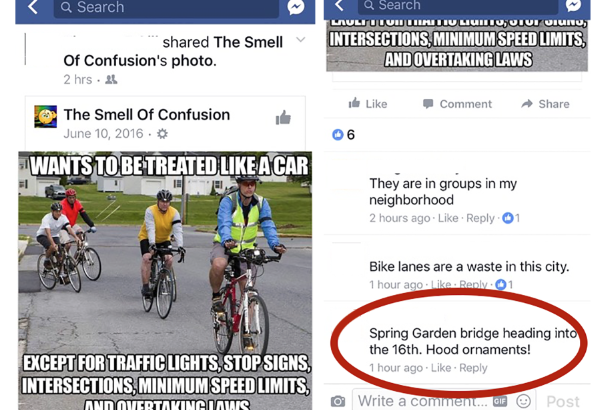 Last Tuesday, 76-year-old transportation advocate Peter Javsicas died after being struck by a minivan that jumped the curb at 16th Street and John F. Kennedy Boulevard.

It was a tragic end to the life of someone who “was always so dedicated to making transportation safer and more accessible.”

The next day, I received an email from someone who wishes to remain anonymous, but is steeped in the world of making Philadelphia’s roadways and sidewalks safer for pedestrians, bicyclists and motorists alike.

The tipster wanted to draw my attention to a Facebook exchange which – while not related to the tragic collision of a day earlier – came off as tacky at best in a city where pedestrians, bicyclists and motorists engage in a seemingly never-ending battle regarding the rules and ethics of the road.

It started with one user resharing a 2016 meme including a photo of four bicyclists and the text “Wants to be treated like a car except for traffic lights, stop signs, intersections, minimum speed limits and overtaking laws.”

In the comments below, another user declared “Spring Garden bridge heading into the 16th. Hood ornaments!”

Now, for some translation.

The commenter was referring to the Spring Garden Street Bridge to the west of the Philadelphia Museum of Art toward Powelton Village and the 16th Police District.

You see, both commenters work in the Philadelphia Police Department. The one who posted the meme – per the tipster – used to be on the SWAT team. The other is identified on LinkedIn as a detective with the Major Crimes Unit.

I’m not going to include their names herein for a couple reasons.

"Philly cyclists know road laws apply to them and if they are broken, it's up to the police to respond accordingly." – Randy LoBasso, Bicycle Coalition of Greater Philadelphia

For one, the detective didn’t immediately respond to my request for comment.

For another, Officer Tanya Little with the department’s Public Affairs Unit, noted that, “The posting that you provided, does not appear to violate any social media policy. The Facebook user is not acting in the capacity as a police officer.”

Even though I take personal offense to referring to those struck by vehicles as “hood ornaments” – because, well, I was one once – I see where the department is coming from with this. (Let ye who abide by the rules of responsible social-media behavior cast the first stone for that is not I, as well).

Still, it’s offensive to think that those sworn to protect and serve would make light of potentially deadly collisions. So, I dropped a line to Randy LoBasso with the Bicycle Coalition of Greater Philadelphia for a little feedback.

"This is a problem within a lot of organizations nowadays: Individuals who should know better making inappropriate comments in public forums like Facebook," he said. "We don't think these comments represent the views of all Philadelphia Police Department officers.

"That said, of course the meme posted here includes incorrect information," he added. "Philly cyclists know road laws apply to them and if they are broken, it's up to the police to respond accordingly. Additionally, when motor vehicle users put cyclists' lives in danger – which is much more often the case – it's up to the police to enforce the existing laws."

So, there you have it. I personally know many police officers who carry the horrific images of car vs. pedestrian or bicyclist cases home with them, even years after they saw them with their own eyes.

It’d just be nice if some of their peers didn’t think it was cute or funny, even in a gallows-humor sense, to use social media to make light of situations that end or dramatically impact lives.