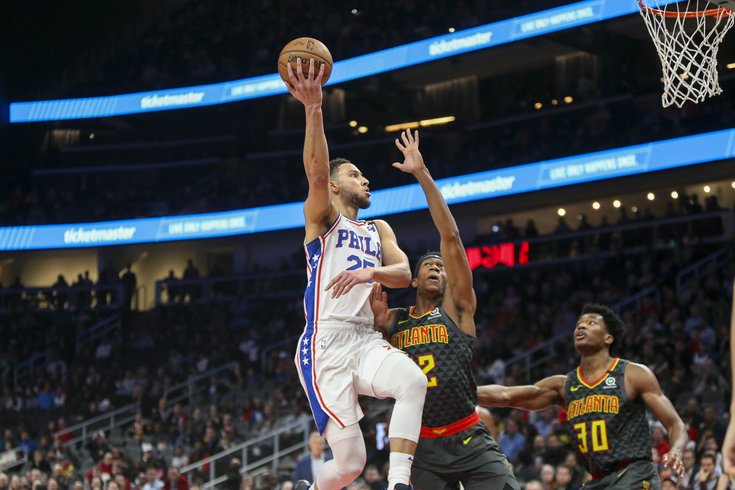 The Sixers rolled into Atlanta like a team who decided they were good enough to not care about the game, and they got the result their effort deserved, falling 127-117 to kick off an important road trip.

• Free-throw shooting has been an issue for the Sixers pretty much all season, in the sense that Joel Embiid is the only guy who regularly gets to the free-throw line. When Embiid was on the shelf, Philadelphia's inability to get to the line was a key factor in bouts of offensive stagnation.

All of this is to say it was good to see the Sixers get to the line at will on Thursday night. Atlanta was down two big men in Alex Len and Bruno Fernando, and anytime your rim protection disappears into the night, you're ripe to get exploited. Joel Embiid was up to his usual tricks, but he was joined by Ben Simmons, Tobias Harris, and even Shake Milton getting into the teeth of Atlanta's defense, which doesn't exactly offer a lot of resistance at the point of attack.

With Atlanta carving them up at the other end of the floor, slowing the game down and picking up points at the line was pretty much a best-case scenario. Unfortunately, they also missed a ton of free throws, which was a pretty big deal in a game that was tight in the final minute.

• After bringing up Milton's name, it feels necessary to continue talking about him some more. Everyone had a visceral reaction to Brett Brown starting him against the Lakers last week, and given his months-long absence from the rotation, I thought that felt justified. But Milton has absolutely justified the coach's faith in him up to this point, taking over some offensive creation responsibilities with Josh Richardson sidelined due to an injury.

Milton isn't offering any extra pick-and-roll juice, but he's a more straightforward offensive player than Richardson, who works methodically and often rejects screens to cross back over the screener. With Milton in the lineup, the Sixers have a player who is most likely going to either shoot the open three or take off for a straight-line drive on closeout, and he's decent enough at both to add value on offense.

I certainly wouldn't expect him to make three after three as he did on Thursday night, but his mechanics are solid and with the increased rhythm from more minutes, I would imagine you'll see a step forward from him as a shooter. Defensively he isn't offering much, but you basically only need him to be a non-zero there. Milton has helped with the continued development of Simmons as an off-ball target/weapon, big time, and has been a nice surprise since returning to the rotation.

• Defensively, it was not Ben Simmons' best night at the office, but I think some of those problems were contextual. Moving back and forth between guard and backup center, he struggled to leave his imprint on the game the way he normally does.

He was much better on the other end of the floor, and Milton's emergence has allowed Simmons to continue his ascent as an attacker away from the ball. There were repercussions from clearing the paint and building the offense around Simmons getting downhill, but he repeatedly drove right through the heart of a poor Hawks defense, and he generated plenty of contact along the way.

As it turns out, when you put him on the floor with guards who are competent pick-and-roll players, Simmons' strengths really start to shine through. His explosiveness and strength set him apart as a finisher, and you can still get value out his passing on the move even if he's not playing as a "point guard."

• The Atlanta Hawks are a team that can score points in bunches when Trae Young has it going, and he gave the Sixers fits on Thursday night. If it was a case of a very good, potentially great player just outplaying them, you'd be happy to shrug your shoulders and say these nights happen.

But the Sixers made some downright boneheaded defensive mistakes against Young and the Hawks. They tried some more aggressive hedging as they did in their first matchup, which is a good way to keep a high-level guard on uncertain ground, but once Young picked apart that first layer, Philadelphia's back-end players were far too slow to react, particularly Mike Scott, who was stuck in cement on a few layups and dunks the Hawks got at the rim.

(Before I am accused of being overly harsh on Scott, that was his best offensive game in a while, with Scott adding some tough finishes around the rim on top of made jumpers. He wasn't the reason they lost.)

When they skewed coverage the other way, living in their usual centerfield coverage for a lot of the game, Young picked them apart as a scorer. Once they tried to attack him as a potential shotmaker out of that look, he just threw lobs over their heads. They had a disaster of a time trying to deal with Young, and basically nothing worked.

It wasn't until the end of the game that they tried to use Embiid in a manner other than dropping him, blitzing Young to junk up the Hawks with the clock ticking away. It had at least moderate success, which is more than you can say about their coverages the rest of the night.

But all of this sort of buries the real point — their effort sucked, and they got what they deserved. The Hawks are a crappy team but they're filled with young guys who actually want to try to win, and the Sixers continue to mail in games against bad teams on the road. Perhaps one day they will learn that they can't bullshit their way through entire games, but it was not this day.

• Figuring out a gameplan that brings out the best in Philadelphia's two best players is a constant issue. In the first half, Ben Simmons was absolutely killing the Hawks attacking the basket, and Embiid played the part of the willing screener and floor spacer, getting out of the way so the Sixers could attack the paint. Embiid looked relatively engaged on offense, even if the whole team's defensive effort left something to be desired.

But when they play games in this style, they can tilt in a direction that takes Embiid out of the offensive flow, and eventually, the chickens come home to roost on both ends of the floor. That's exactly what happened on Thursday night, as Embiid just sort of drifted through most of that game without making positive contributions on either end.

Regardless of the reason, it's inexcusable to mentally check out of games when you don't get enough touches. Embiid talks a big game about doing whatever it takes to help out the team, and he commits to it for stretches at a time, but there is a breaking point where he makes it clear the gameplan is not to his liking. And that point was easy to point to on Thursday night – when he stood flat-footed under the rim as Atlanta tipped in a shot to close out the third quarter, never even pretending to make an honest effort.

It's not something that is unusual for big men, who are moodier than most other players when it comes to their touches, but Embiid is supposed to be the franchise player. He had a decent return on Thursday, and then he turned in a bogus effort in Atlanta against a team that should have been easy for him to dominate. Simmons has flaws on offense that we discuss fairly often, but at least you can say he brings the requisite level of give-a-damn every night.

• That being said about the big fella and his mental focus, the Sixers could have at least tried to get him involved on offense. They were using him predominantly as a screener against a team that was guarding him with the likes of Vince Carter — what the hell is that?

• Just a horrific effort from Raul Neto on Thursday night. Got hammered on switches defensively, couldn't buy a shot on offense, turned the ball over in ugly fashion, couldn't imagine him playing worse. He had his best game of the year against the Warriors earlier in the week, and this was by far his worst. Hurt the Sixers all over the floor and there is no way to dress that pig up.

Brown putting him back in when the Sixers needed a spark midway through the fourth has to be one of the more absurd in-game decisions I can remember him making. Forget Trey Burke, you could have gone with almost literally anyone else in that spot and expected a better return-on-investment.

• Zhaire Smith could end up being a productive basketball player one day, and you certainly see his length and athleticism pop sometimes. But he still looks like an athlete who happens to be playing basketball rather than an actual basketball player, and that's a problem for the present-day Sixers on the floor and in potential trades they'd probably like to make to upgrade the roster.

He is more activity than anything else right now. There are brain cramp moments that you see pop up at times that are hard to justify — when Joel Embiid has Vince Carter sealed off on the low post, the offensive play should not end with Smith taking a pull-up jumper on the other side of the floor. That's not a Smith-only problem, but man, he doesn't seem to understand his place in the hierarchy.

• The numbers don't look that bad for Harris — 21 points, nine rebounds on 6/15 shooting — but it certainly felt like a terrible game. Plenty of scoring opportunities left on the table (and some ugly misses) and no real contributions on the defensive end; he just kind of felt like he was there.

• That officiating crew had an absolute disaster of a game. Ben Simmons got away with one of the most obvious travel calls of the season toward the end of the first half, and that wasn't even the worst sequence of the final few minutes.

Trae Young threw a chicken wing out at Tobias Harris as the first half came to a close, picking up three free throws on a bogus call, and then chaos ensued. A technical foul that was given to Harris got the ball to Young quickly enough that the Sixers couldn't challenge, and when Brown found out his right to challenge had been taken away, he picked up a tech of his own. When all was said and done, the Hawks had picked up five free-throws at the end of the half on a complete farce.

On top of all that, there was confusion over who had been given the technicals, with the initial belief being that Brown might have been thrown out of the game. In a game that ended up being pretty close, that five-point swing was massive.

• While we are talking about swings, why were the Sixers fouling down five with just over a minute left? Braindead play or poor instructions from the coach, I can't be sure of which yet.