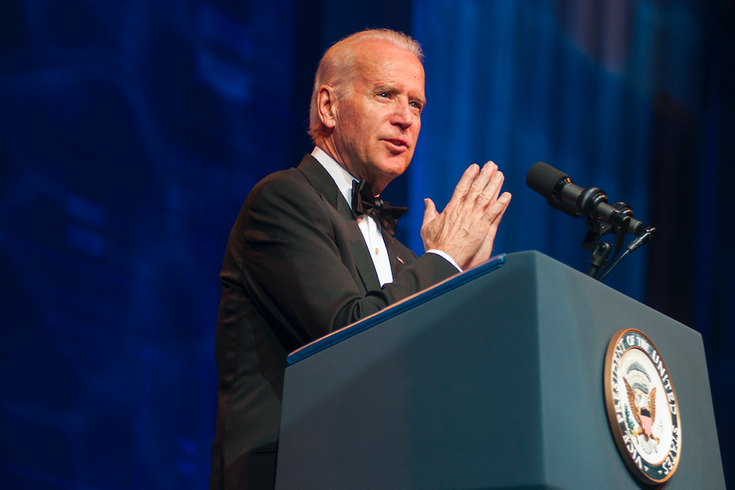 Biden spoke out against Weinstein during a speech Wednesday, when he was accepting a 2017 Courage Award from the New York City Anti-Violence Project, which works to end violence against those in the LGBTQ community, according to the Huffington Post.

He called Weinstein's actions "immoral" and commended the women who have come forward.

"This disgusting behavior, at least on the part of Harvey Weinstein, has been brought to an abrupt and justifiable end," Biden said. "But it's long past time for the powerful men in Hollywood to speak up, to be strong enough to say something, because silence is complicity."

Biden also shared an important lesson he learned from his dad.

“My father taught me that the greatest sin was the abuse of power: mental, physical or economic," he said during the speech. "The cardinal sin was for a man to use his power to abuse a woman or a child. It is disgusting.”

The New York Times first shared multiple allegations of sexual assault against Weinstein. Big-name stars, including Ashley Judd, Gwyneth Paltrow and Angelina Jolie, have all come forward to discuss their interactions with the film executive.

Aside from his powerful position in Hollywood, Weinstein is also a significant donor to the Democratic party. Former Democratic presidential candidate Hillary Clinton, as well as former President Barack Obama, have since issued statements speaking out against him.

During their terms in the White House, Obama and Biden launched the "It's On Us" campaign, an effort to spread awareness on how to help end sexual assault in universities and colleges across the country.

Biden has been vocal in the past year about speaking out against sexual assault, calling bystanders who don't help "cowards" in an interview with Teen Vogue in the spring.

Weinstein has since been fired from the Weinstein Company. His wife, Georgina Chapman, told People magazine this week that she has "chosen to leave [her] husband."

Biden was named the Benjamin Franklin Presidential Practice Professor at the University of Pennsylvania earlier this year. He will return to the area in November as part of the tour for his upcoming book, "Promise Me, Dad: A Year of Hope, Hardship, and Purpose."