'Legends of the Fork,' featuring Buddy Valastro, will visit Philadelphia's oldest bar to learn about its food, drinks and crowds 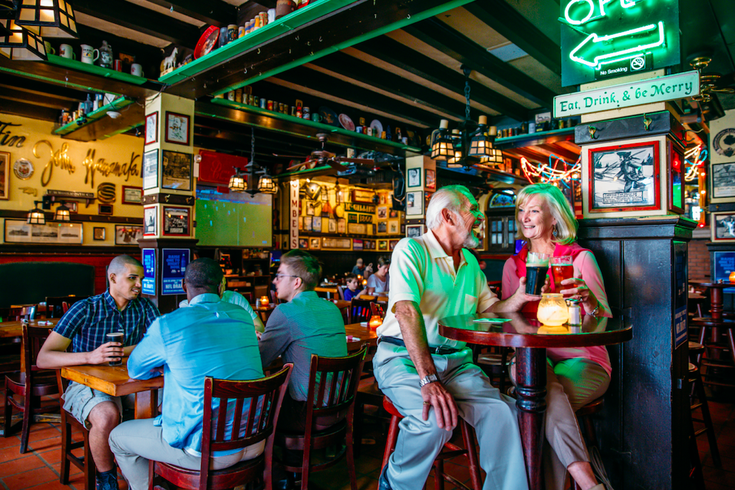 'Legends of the Fork,' an upcoming A+E series starring Buddy Valastro of 'Cake Boss,' will visit McGillin's on Wednesday to film some of the food, drinks and crowd that make the restaurant a Philly staple.

McGillin's Olde Ale House, the oldest continually operating bar in Philadelphia, will soon be featured on an upcoming A+E show about the country's most legendary establishments.

"Legends of the Fork," starring Buddy Valastro of "Cake Boss" fame, will visit McGillin's on Wednesday to film some of the food, drinks and crowd that make the restaurant a Philly staple.

"We're thrilled that 'Legends of the Fork' has chosen to feature McGillin's, the oldest bar in Philly and one of the oldest in the country," Christopher Mullins, Jr., who co-owns the bar with his parents, said. "Lots of shows focus on the newest places. We love that this new show appreciates and highlights longevity."

The McGillin's team has already had several conference calls over the past few weeks with the show's producers, who also stopped by to scout out the location.

Mullins, along with his father, Chris Sr., will be interviewed during the TV shoot. The show will film in the kitchen as McGillin's chef Gordon Walker shows Valastro how to make the restaurant's signature shepherd's pie, Mile High Meatloaf and Emerald Isle (the secret, off-menu corned beef cheesesteak).

The camera crew will also aim to capture the typical bar scene at McGillin's — and it's calling on locals to help. The McGillin's team is looking for regulars to head to the bar a little early, and bring friends, to act as extras between 10:30 a.m. and 12:30 p.m. on Wednesday. Those interested can email mcgillins@aol.com, message the restaurant on social media or simply show up for lunch to join in on the fun.

Wanna be on TV? We're doing a TV shoot @McGillins on Wed, 1/11 from 10:30 am -12:30 pm and need to fill the bar. For a new @AETV show called "Legends of the Fork" with @CakeBossBuddy. Interested? DM us, email mcgillins@aol.com or just come by for lunch with friends. pic.twitter.com/t4swRmXZ4M

"Legends of the Fork" will follow Valastro as he travels across the U.S., celebrating the most legendary restaurants, dishes and stories of the country's culinary landscape.

Valastro is a celebrity baker who rose to fame through his reality TV show "Cake Boss," which aired on TLC from 2009 to 2020. The show featured Valastro and his family working on elaborate, creative cakes in their Hoboken bakery, Carlo's Bake Shop, which now has locations in South Jersey and Philadelphia as well.

In June, Valastro joined a multi-platform creative partnership with A+E Networks, which will include over 60 hours of original programming, including the development of multiple new series and holiday specials.

This isn't the first time McGillin's, which opened in 1860, has been highlighted in national media. It was featured on MSNBC's "Morning Joe" show in 2016, the "Oldest Bar in Town" YouTube series in 2017, BBC America midterm election coverage in 2018 and 2022, a Modelo commercial starring Mullins in 2019 and on The Today Show live on Saint Patrick's Day 2021.