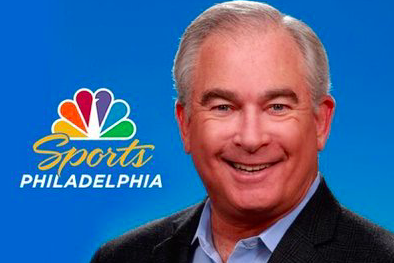 The longtime face of "Philly Sports Talk," formerly "Daily News Live," will soon begin anchoring all of the pre- and post-game shows on the new-look NBC Sports Philadelphia.

Barkann, who's been at the network for nearly 21 years since its launch, will move from the afternoon talk format to duties covering the Flyers, Sixers and Phillies in addition to his existing Eagles responsibilities, the station said in a statement released Thursday.

“Michael has changed the way Philadelphia sports fans watch and interact with their teams, making Eagles Postgame Live a must-watch for all Eagles fans,” said NBC Sports Philadelphia President Brian Monihan. “We are thrilled that he is bringing his same level of passion and knowledge to our highly-rated Flyers, Phillies and Sixers pre- and post-game programs.”

Amy Fadool and Marc Farzetta will become the permanent co-hosts of "Philly Sports Talk," where they have been hosting the Friday show since earlier this year.

The move comes after an exodus of fixtures from the former Comcast SportsNet in recent years.

Barkann, who left SportsRadio 94WIP in 2016, will receive a special tribute on Thursday's edition of "Philly Sports Talk."

“It has been my honor to bring “Daily News Live/Philly Sports Talk” onto the air 20 plus years ago, and help it grow to become a daily staple of Philadelphia sports,” said Barkann. “I now have the opportunity to bring fans closer to the games they love by hosting the pre- and post-game programs. I am excited for, and appreciate this opportunity.”