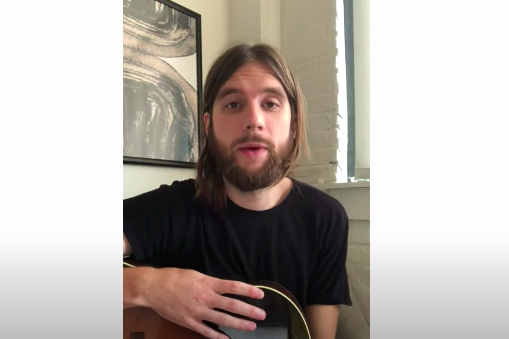 Songwriter Matt Quinn delved into the way his writing and reading tastes impacted the musical style of his band, Mt. Joy, on the latest episode of Literary Hub's Mighty SONG Writers Video Series.

He then covered "Dire Wolf," by the Grateful Dead, noting the influence his father had on his musical tastes.

"Dire Wolf is written by one of my heroes, Jerry Garcia, who played in a band called the Grateful Dead, who you might've heard of," Quinn said. "I grew up listening to this song because my dad was a big fan of the band."

He added that the song's stylized storytelling also inspired his songwriting.

"I always really appreciated the storytelling in this song," Quinn said. "That's sort of what got me into writing music in general, falling in love with some of the stories in these songs."

Mt. Joy was formed after Quinn and his friend Sam Cooper reconnected in Los Angeles. The two initially had written music together while attending high school in Chester County.

LitHub's video series was created to bring attention to Mighty Writers, a nonprofit that provides free literacy-focused services to thousands of students in Philly, Chester County and Camden, New Jersey.

Mt. Joy is performing at the Philly Music Festival on Thursday. Philly band Japanese Breakfast is headlining the two-day festival alongside The Districts and Clap Your Hands Say Yeah.