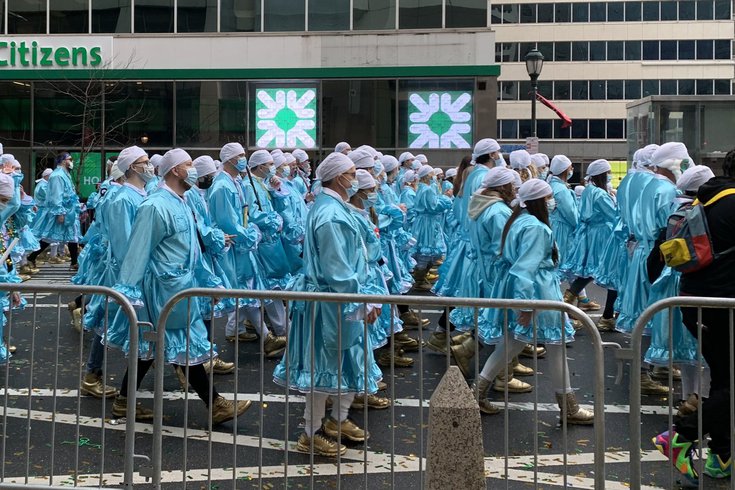 The 2022 Mummers Parade arrived in Philadelphia on Sunday after a one-day delay due to rain. It is the first parade since the COVID-19 pandemic began in early 2020. Pictured above are some masked Mummers processing along the parade route in Center City, though not all participants in the parade were masked.

The 2022 Mummers Parade arrived (albeit delayed) to Philadelphia for the first time since in over a year on Sunday. Though the Fancy Brigade still performed as planned on New Year's Day at the Pennsylvania Convention Center, residents and visitors still flocked to Center City on Sunday morning as the Mummers processed and performed along South Broad Street.

Last year's Mummers Parade was cancelled due to COVID-19 concerns, and though omicron continues to surge across Philadelphia and the rest of the country, the city decided to proceed with the festivities anyway.

The Mummers Parade is often a touchy subject in parts of Philadelphia, particularly given its controversial and often racist history. Still, for some Philadelphians it remains a touchstone New Year's tradition, and the widespread crowd in front of City Hall this morning is no exception.

Those who couldn't make to in-person to the festivities could watch the parade live on Philadelphia's local news affiliate stations. Here are some reactions—both supportive and critical—from social media over the past few hours as the Mummers Parade is underway.

Then make it racist (I’ve seen Blackface), choreographed, much more drunken & belligerent. Yet somehow still a thing on New Years Day in Philly.

As I explained the #Mummers to my kids their response was that we must go to 2 Street tonight.

So that’s a thing. About to show them Philly at its … Mummer-est. pic.twitter.com/2BF2hCGE43

The Mummers Parade began as a New Year's Day tradition in 1901, though Mummers-like celebrations have been occurring in Philadelphia since the late 1700s.

Though many of the Mummers were unmasked throughout the day on Sunday, some groups exercised caution amid rising COVID-19 cases due to the surging omicron variant.

Though the official 2021 parade was cancelled last year amid COVID-19 concerns, a smaller, protest parade was held along 2nd Street in South Philadelphia. The "New Year's Day Peaceful Protest Against Jim Kenney" arrived as Philly had continued to ban large-scale gatherings throughout the pandemic.

During the last official Mummers Parade, Mayor Kenney threatened to cancel the Mummers following the use of blackface during a performance by Mummers club Froggy Carr, noting that the organizers need to make changes.

Saturnalia are the 2022 fancy brigade champions. They are back to back champions. #mummers #mummersparade

Those who want to catch up on the indoor portion of the 2022 Mummers Parade, which took place on New Year's Day at the Pennsylvania Convention Center, can find clips of several performances, including that of the Saturnalian Fancy Brigade, through PHL17's ongoing coverage.

My favorite response to the Mummers Parade being postponed due to rain ☂ pic.twitter.com/WJ16Jy7vZ1

Imagine having the theme of "Salute to Medical First Responders" and not wearing masks during an infection spike in a pandemic. 🙃 #MummersParade

Here comes the good stuff! My favorite part of the Mummers Parade, the string bands!!! pic.twitter.com/vRPQWQ7ake

For those who would still like to catch some of the remaining coverage of the 2022 Mummer's Parade, PHL17 has an ongoing live stream for the duration of the festivities.