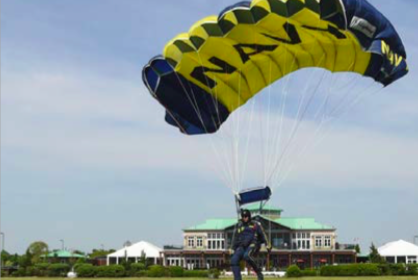 A Navy Seal and parachutist participating in a spectacle for the Jersey City Fleet Week event died Sunday after plunging into the Hudson River.

The incident occurred near Liberty State Park when the victim, an unidentified member of the Navy Leap Frogs, noticed a malfunction with the parachute and disengaged from it, according to the Jersey Journal.

While the parachute wound up landing in a parking lot, the Seal team member crashed into the water, where Coast Guard and fire department officials attempted to rescue him. He was rushed to Jersey City Medical Center and pronounced dead shortly after 1 p.m., officials said.

Authorities are investigating the cause of the parachute malfunction.

Fleet Week, a free event open to the public, is intended to show off the latest capabilities of maritime services in the U.S. Navy, U.S. Marine Corps and U.S. Coast Guard.