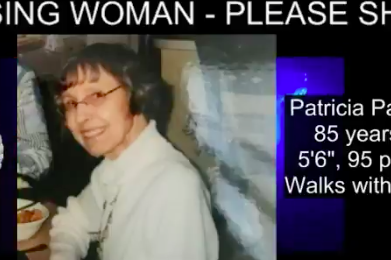 Patricia Parkman, 85, of Philadelphia was found dead in Jacksonville days after she was reported missing, according to police.

The body of an elderly Philadelphia woman has been recovered in Jacksonville after she was reported missing earlier this week, according to the local sheriff's office in Florida.

Sad to report that we believe we have located the remains of Ms. Parkman near I295 and Commonwealth. No foul play is suspected.

Thank you to everyone for your help and concern. https://t.co/81wsEwThtt

Patricia Parkman, 85, was first reported missing by authorities on Wednesday. She had last been seen at a Jacksonville hotel on Monday.

Investigators said Parkman, who was diagnosed with dementia, traveled from Philadelphia to Pensacola. From there, she flew to Atlanta, and then back south to Jacksonville, according to News4Jax.

Parkman was reportedly staying at a Quality Inn & Suites, where police found her belongings. Her remains were found nearby the hotel close to I-295 and Commonwealth Avenue.

Parkman had a niece in Jacksonville — and had previously traveled there by train — but her niece was unaware that she was in the area this week.

Authorities said no foul play is suspected in Parkman's death.