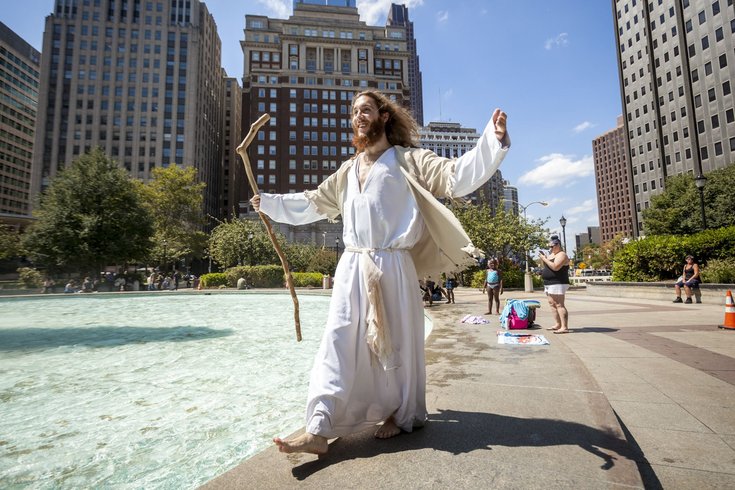 Local icon Philly Jesus made an unexpected appearance at new Philadelphia Archbishop Nelson Perez's installation mass on Tuesday, and he was dragged out of the church by the police and cited for trespassing.

New Philadelphia Archbishop Nelson Perez had his installation mass at the Cathedral Basilica of Saints Peter and Paul in Logan Square on Tuesday, and a familiar face made an appearance at the ceremony: Philly Jesus.

The local icon, whose real name is Michael Dennis Grant, was dragged out of the cathedral and cited for trespassing the service, according to the Inquirer.

Wearing his recognizable white robe and carrying his shepherd's crook, Philly Jesus was spotted near the front of the church when police approached and informed him that he had to leave the private event. After refusing to exit the service and insisting on staying, officers dragged Philly Jesus out of the church in handcuffs and handed him a $25 trespassing citation for not cooperating.

Here’s the exchange between Philly Jesus and police officers as he sat handcuffed on a curb outside the cathedral, telling him that he would be arrested if he tried to reenter the church. His handcuffs were eventually taken off and he was allowed to go freely.

“I forgive you for trespassing against me,” Philly Jesus said to the cops.

Philly Jesus was asked to leave by police multiple times and was dragged out of the church. Now he’s sitting in handcuffs. Police said it’s a private event and he was trespassing. pic.twitter.com/j8ZEVbUys2

Not long after being let go, Philly Jesus was spotted in Center City blessing worshippers.

Philly Jesus already back at work on Market Street after being ejected from Archbishop Nelson Perez’s installation at Cathedral pic.twitter.com/rnKzUeTPq2

This isn’t the first time that Philly Jesus, who can frequently be found traversing LOVE Park, has found himself in controversy. He claimed that protesters attending a Martin Luther King Jr. Day march in Philadelphia in 2017 harassed him.

Grant was also arrested at the Apple Store in Center City in May 2016 and was charged with trespassing and disorderly conduct for engaging in fighting after employees asked him to leave. It even earned him a shoutout on “Saturday Night Live.”

Philly Jesus’ most recent appearance in the public eye came during Nelson Perez’s first mass as Philadelphia’s archbishop after being named to the post last month. Archbishop Perez is replacing Archbishop Charles Chaput, who is retiring at the age of 75 after serving in the role for eight years.

The 58-year-old Perez is returning to Philadelphia after serving as the bishop of Cleveland since 2017. Perez began his time in the priesthood by entering the Saint Charles Borromeo Seminary in Philadelphia, and he worked in the Philadelphia archdiocese as a priest from 1989-2012.

From 1989-1993, he was the parochial vicar at St. Ambrose Parish in Olney. Then after administrative positions with the archdiocese Office for Hispanic Catholics and Catholic Institute for Evangelization, he became pastor at St. William Parish in Philadelphia's Crescentville neighborhood from 2002-2009 and pastor of St Agnes Parish in West Chester, Chester County from 2009-2012.

Now, Perez will be the first Hispanic archbishop in Philadelphia.