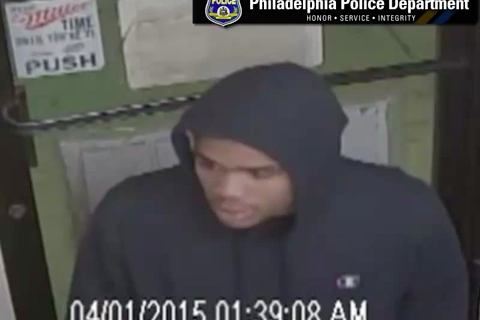 Police are looking for a man who fired an errant shot at a taxi cab driver in Overbrook earlier this month.

Philadelphia police are looking to identify a suspect wanted for shooting at a taxi cab driver earlier this month in Overbrook.
The suspect fired a single, errant shot at a Philly Cab Company taxi after exiting the cab without paying his fare, police said. The driver, a 53-year-old male, was not injured.
The suspect entered the cab at 56th and Market streets April 1 at 1:30 a.m., police said. The suspect asked the driver to make two stops, including the Good Times Bar at 5527 Lansdowne Ave., before exiting the cab at 55th Street and Lancaster Avenue.
The driver drove alongside the suspect requesting his fare, police said. The suspect pulled out a handgun and pointed it at the driver, who heard a gunshot as he drove away.
Police described the suspect as a 5-foot-11, black male between the ages of 20 and 25. The suspect had a light mustache and was wearing a dark-colored, Champion hooded-sweatshirt, tan pants and brown shoes.
The suspect was caught on a surveillance video outside the Good Times Bar.
Anyone with information regarding this crime or suspect is asked to contact the Southwest Detective Division at 215-686-3183.