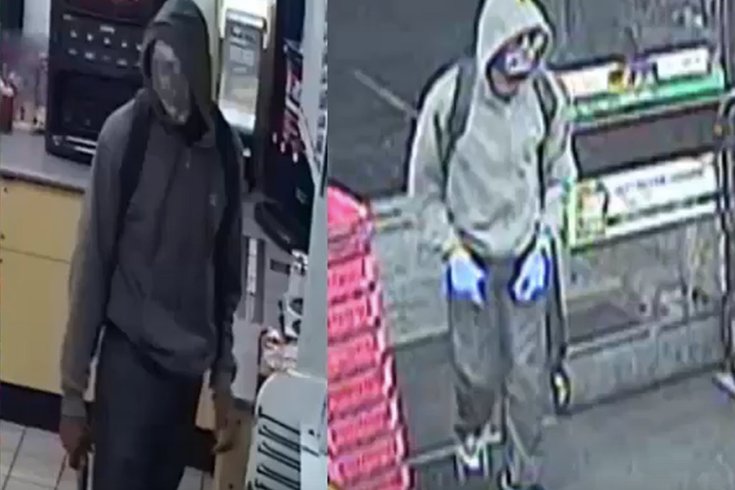 Police are searching for suspects in five robberies in Northeast Philadelphia and two others in Bucks County. In multiple incidents, the suspects wore Halloween masks and carried backpacks.

Police detectives are investigating what they are calling a pattern of armed robberies in Northeast Philadelphia and Bucks County.

Seven robberies – most of them in the Northeast – have occurred between Sept. 24 and Wednesday, Philadelphia police said on Thursday. The crimes have been linked by detectives based on the description of the offenders, the weapons used and geographic proximity. Authorities believe at least two suspects wore the same clothing during the robberies.

In the most recent incident, at 1:30 a.m. on Wednesday, a Sunoco A Plus station at 10950 Roosevelt Blvd. was robbed by a man armed with a handgun, police said. He reportedly took an undisclosed amount of money and cigarettes and attempted to take the complainant's vehicle. He fled and was last seen heading south on the Boulevard. No injuries were reported. The suspect was described as a black man, about 25 years old, 6 feet 2 inches tall, with a thin build and light complexion. He was wearing a gray hooded sweatshirt with a white emblem on the front, police said.

Two robberies were reported Monday – at the same service station.

About 2:18 a.m., the Sunoco A Plus at 13000 Bustleton Ave. was held up by a man with a handgun, police said. The suspect reportedly took an undisclosed amount of money and fled and was last seen heading north on Bustleton Avenue. No injuries were reported. Police gave the following description: white man, about 22 years old, 5 feet 8 inches tall, with a thin build and a dark complexion. He was wearing a dark hooded sweatshirt.

Later that morning, around 10 a.m., the service station was robbed again. According to police, a man armed with a handgun approached the cashier and demanded all the money from the cash register. The suspect was reportedly given an undisclosed amount of money, fled on foot and was last seen headed west on Byberry Road. The suspect was described as a white man with a thin build, between 25-35 years old, who walks with a noticeable limp. He was wearing a gray hooded sweatshirt, long dark-colored shorts, light-colored gloves and a gold or yellow-colored mask.

Around 1:34 a.m., an armed man wearing a mask and gloves entered the 7-Eleven store at 1900 Welsh Road and demanded money and merchandise, police said. After reportedly taking an an undisclosed amount of money and 40 packs of cigarettes, the suspect fled the store. He was last seen heading east on Welsh Road toward Roosevelt Boulevard. No injuries were reported. Police gave the following description: black man, about 22 years old, about 5 feet 8 inches tall. He was wearing a light-gray hooded shirt and dark pants.

About 90 minutes later, in Upper Southampton, Bucks County, a 7-Eleven store was robbed. In that 3 a.m. incident, police said a man brandishing a black semi-automatic large-frame pistol entered the store. When the clerk fled through a back door, the suspect tried to access the cash drawer before reportedly taking several packs of cigarettes and fleeing. Police gave the following description: white man, wearing a dark zipper hoodie inside-out, blue jeans, black sneakers with a white sole and a purple Halloween mask and gloves.

On Oct. 2, at about 11:54 p.m., a man held up the 7-Eleven store at 25 Newtown Road in Warminster Township. Police said the man entered the store wearing a skeleton mask and brandishing a pistol. After demanding cash and cigarettes, he reportedly fled the store with an undisclosed amount of cash. No injuries were reported. The suspect was described as a white man, about 6 feet tall with a thin build and between 30-35 years old. He was wearing a maroon-colored shirt and a black-colored Halloween mask.

The first of the incidents believed to be connected occurred about 11:13 p.m. on Sept. 24 at a 7-Eleven store at 8101 Oxford Ave. Police said a man entered the store and brought some items to the cash register, then pulled a black semi-automatic handgun from his backpack and demanded money from both registers. After reportedly taking an undisclosed amount of money along with the merchandise, he fled and was last seen headed west on Oxford Avenue toward Rhawn Street. No injuries were reported during this incident. Police gave the following description: white man, between 19-21 years old, 5 feet 7 inches to 5 feet 8 inches tall with a thin build. He was wearing a black bandana and hoodie; black, blue and orange New York Knicks basketball shorts (three-quarters length); and black sneakers, as well as a knee brace on his left leg. He reportedly had tattoos on his legs.

Philadelphia police are asking for the public's help in identifying the suspects. If you see these suspects, do not approach them; instead, immediately call 911 or Northeast Detectives at 215-686-3153.

This electronic form can also be used to submit a tip anonymously.