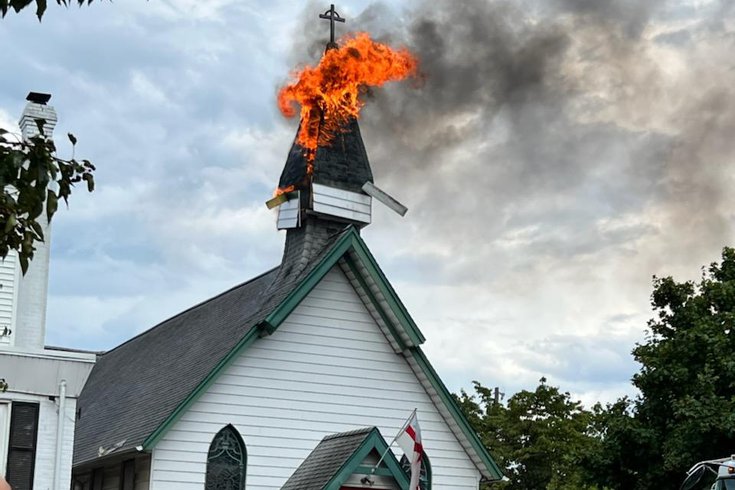 Courtesy/Grace Episcopal Church and the Incarnation

Grace Episcopal Church and the Incarnation, at 2645 E. Venango St. in Port Richmond, briefly caught fire Monday afternoon after the steeple was struck by lightning. The church is raising money to help cover the cost of repairs.

A church that has stood in Philadelphia for more than a century was struck by lightning during Monday afternoon's thunderstorms, setting fire to the building's steeple and causing water damage inside the property.

Grace Episcopal Church and the Incarnation, at 2645 E. Venango St. in Port Richmond, was struck around 4 p.m.

"There was a sound of an explosion," said the Rev. Brian Rallison, who serves as the church's rector. "People in the neighborhood said it sounded like a power station had blown up."

The church shared several photos on Facebook that show the steeple and cross in flames. Philadelphia firefighters put the blaze out within 20 minutes.

If you have watched the news today, you might have already heard about our beautiful little church in Port Richmond. ...

Posted by Grace Episcopal Church and the Incarnation - Philadelphia on Monday, July 25, 2022

The fire did not affect the church's altar, baptismal font or sanctuary, which contains a number of ancient carved wood items. Rain water from the storm is the primary source of damage, especially in a lower level of the building that previously had been used as a children's chapel.

"We're assuming about a quarter of a million dollars worth of water damage," Rallison said.

The burnt steeple was removed from the church Tuesday, revealing the bell inside, which dates back to the 1880s. The bell appears to show signs of rust, but it may have been spared significant damage from the fire. It will be removed until repairs to the building have been made.

Posted by Grace Episcopal Church and the Incarnation - Philadelphia on Tuesday, July 26, 2022

The church structure is about 125 years old and was originally built as St. George's Chapel. It was previously a missionary church and was later centered around children's ministry in the 1960s, Rallison said. After World War II, the area was mostly surrounded by farmland until Port Richmond developed into a residential community.

Today, Grace Episcopal Church and the Incarnation is largely dedicated to food ministry and strives to represent people who are disenfranchised, including those in the LGBTQ+ community. During the pandemic, the church's food drives fed between 400-600 people per week.

Rallison, who joined the church in 2019, called the fire unfortunate but said he's relieved nobody was hurt.

A GoFundMe campaign is seeking donations to help cover the insurance deductible to make necessary repairs to the church. Funds that are left over will go to future food drives.

In a letter to the church community, Rallison said he expects to hold planned church services inside the parish on Sunday at 9 a.m.