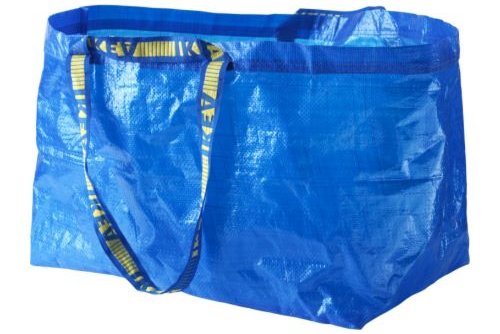 An original Ikea FRAKTA bag is sold online for .99 cents.

Two Los Angeles-based brands have teamed up to create a hat that's reminiscent of a certain Swedish furniture store.

The cap should be available to purchase online in the coming weeks, according to HighSnobiety, a fashion news website.

Customers interested in owning the cap will need to shell out a little more than they would at any IKEA. The original shopping bag is sold online for .99 cents, while the hat will reportedly go for $38.

IKEA, whose U.S. headquarters are in Conshohocken, has been getting a lot of attention as of late for its durable tote.

Balenciaga, a French luxury designer, is selling a bag that's been compared to IKEA's classic – for a whopping $2,145.

The company recently released an advertisement in response to the response that gives directions on "How to identify an original IKEA FRAKTA bag." The ad lists six steps, including "throw it in the dirt," and instructs consumers to look at the price tag.

“We are deeply flattered that the Balenciaga tote bag resembles the IKEA iconic sustainable blue bag for 99 cents," a spokesperson told Today. "Nothing beats the versatility of a great big blue bag!”