Bradford: Bottom line, I wanted to be an Eagle 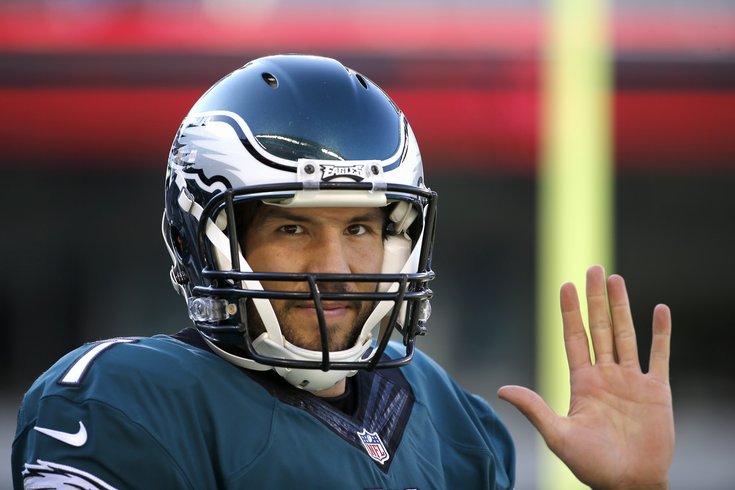 No longer donning the beard and shaggy hair, a clean-cut Sam Bradford addressed the Philly media on Thursday after the quarterback signed a two-year, $36 million contract with the Eagles.

As one would expect, the former Heisman winner was all smiles while fielding questions. Part of that could be the guaranteed money coming him way — he did, after all, just sign an $11 million autograph — but according to Bradford, he was just relieved to have a deal in place.

Moreover, he got the deal he wanted with the team he wanted.

"It's one of those things, I told you guys at the end of the year that this is where I wanted to be, I wanted to be back here," said Bradford, who also denied reports that he was unhappy in Philadelphia. "I knew that, so to finally get it done, to know I was going to be back here and won't have to worry about anything else, it was a huge relief to get that phone call this week."

But due to the length of this deal, Bradford could find himself in a similar situation in two years — and just one if the Eagles don’t think he’s worth the $23.5 million cap hit he’ll cost them in 2017.

"I'm not really concerned with the length of the contract,” Bradford said. “My main objective was to be back in Philadelphia. It just happened on a two-year deal, and that's perfectly fine with me. I would've preferred a 100-year deal, if they wanted to give it to me [jokingly]. Like I said, it's one of those things, I just wanted to get back in Philadelphia. My agent felt like it was a great deal for both sides. I think the organization felt the same way. As long as I continue to play the way I know I can, it shouldn't really matter."

And that’s exactly what you’d expect to hear from any player — especially a quarterback — after signing with a team. But, if we assume he’s telling the truth, why did Bradford find it so appealing to remain with the Eagles, aside from the millions they’ve promised to pay him.

First, Bradford pointed to his new coach, Doug Pederson, and specifically the fact that he is a former quarterback, which he called a “huge bonus.” He also said that he talked some other people around the league that have played and worked for Pederson, and the reviews were nothing short of stellar.

It’s more than that, however. Bradford has played in four different offensive systems in his six NFL seasons. During the season, he pointed to continuity as a common bond between all of the best quarterbacks in the league, a sentiment he reiterated on Thursday.

And while that’s a bit of a chicken-and-egg debate — coaches tend to have more job security when they have an elite quarterback that wins a lot of games — there’s still some truth to that assessment. And because the Eagles parted ways with Chip Kelly in December, Bradford was going to be playing in a new system next year regardless.

Now, at least he’ll still be playing with many of the teammates with whom he spent last season, his first with the team, building some chemistry. According to Bradford, continuity isn’t just key for developing great quarterbacks, it’s also crucial to building winning organizations.

Bradford: "If you look at any organization, stability is a key to success... Hopefully we can spend next 5-10 years together and build that"

If that’s the kind of long-term stability Bradford wants, he’s going to need to perform on the field, not only because of the length of his contract, but because of Pederson’s continued desire to draft and develop a quarterback of the future.

Whether or not that happens this year is still up in the air, but this deal hardly rules it out. Still, Bradford had no desire to hit free agency, despite the fact that quarterbacks rarely make it to the open market and are highly coveted [read: highly compensated] when they do.

“[What other teams may have offered] wasn’t really in my thoughts,” he said. “I didn’t really talk about that with my agent. I told him I wanted to come back [to Philly] and to get it done here. We really didn’t talk about what the other options were.”

Not even a little, if only to gain some form of leverage in negotiations with the Eagles?

“There really wasn’t any temptation for me to [test free agency],” Bradford added. “I told my agent after the season that this was where I wanted to be, and I wanted him to get me back here. And I’m thankful that he did.”