Ranking the quarterbacks after the first practice, plus a look at some other players who stood out in Mobile 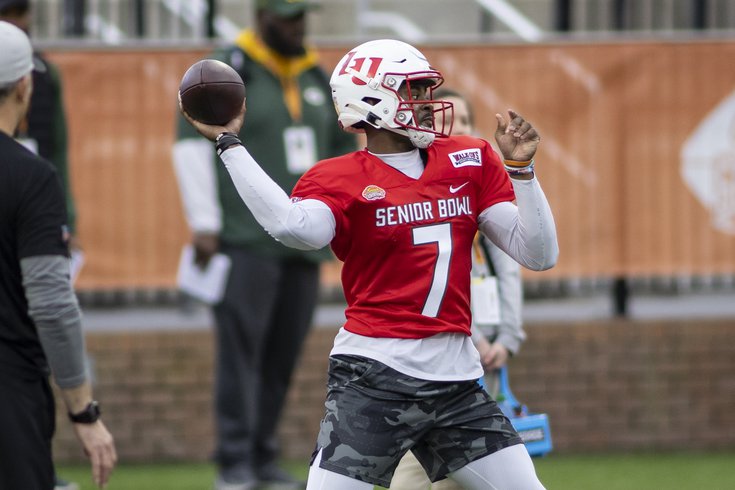 Senior Bowl practices kicked off on Tuesday, with Howie Roseman, Nick Sirianni, and a gaggle of other key Eagles front office and coaching staff personnel in attendance. Because the Birds have 10 picks in this year's draft, this year's Senior Bowl is of particular interest. Let's get to the notes.

• To begin, it should be noted that the Eagles drafted five players in 2021 who participated in the 2021 Senior Bowl, including their top two picks. They were DeVonta Smith, Landon Dickerson, Tarron Jackson, Marlon Tuipulotu, and JaCoby Stevens. Smith and Dickerson were hits in their rookie seasons, obviously. Jalen Hurts also competed at the 2020 Senior Bowl.

• Most of the top quarterbacks in this year's class are here in Mobile for the week. They are Pittsburgh's Kenny Pickett, Cincinnati's Desmond Ridder, Nevada's Carson Strong, Liberty's Malik Willis, North Carolina's Sam Howell, and Western Kentucky's Bailey Zappe.

If the Eagles are going to select a quarterback in the 2022 NFL Draft, my belief is that they must show that they have traits that are obviously superior to Hurts'. It was just one day of practice, and these guys were throwing an NFL ball in a competitive setting for the first time, but my initial group-wide takeaway was... meh. I'd rank them like so:

• The most impressive receiver on the day was South Alabama's Jalen Tolbert. He caught a deep ball down the left sideline for a TD in 1-on-1's, and he went up high for a contested catch in 7-on-7's.

The break by Christian Watson is soooooooo smooth here. Puts the DB on the ground and creates nice separation. pic.twitter.com/8yMHQchVxI

• A no-name running back who had a nice day was Florida International's D'Vonte Price. On consecutive plays, he laid a nice pop on a blitzer in pass pro, and then had a huge gain running through the left side of the line with some burst. His numbers aren't impressive, but he made a good impression.

• Tight end is sort of an underrated need for the Eagles this offseason. Dallas Goedert is a stud, but current TE2 Jack Stoll caught four passes in 2021. If the Eagles are going to run their fair share of 2-TE sets, they could use a tight end with some more receiving chops.

I thought that the tight end who had the best day was Colorado State's Trey McBride. He caught passes all over the field. That's something he also did at CSU, just not in the end zone. He had 90 catches for 1121 yards and 1 TD in 2021.

• I only got to see OL-DL 1-on-1's for one of the two practice sessions on Tuesday. In the session I watched the defensive linemen absolutely destroyed the offensive linemen. Some of the standouts:

Yikes. Ogbonnia also smoked Boston College's Zion Johnson on the interior. Johnson is thought of as one of the top OL prospects here. Ogbonnia is a 6'4, 320-pound nose tackle who only had 4.5 sacks in four years at UCLA. I don't know if Chip was making this guy 2-gap there, but he showed that he has some pass rush ability.

• We profiled WKU's DeAngelo Malone as a SAM linebacker candidate in Jonathan Gannon's defense earlier this year. He had 94 tackles, 9 sacks, 4 forced fumbles, and 4 pass breakups in 2021. He had a strong day, and has more upside than Patrick Johnson, in my opinion.

DeAngelo Malone can fly. Western Kentucky sack master is going against the nations' elite this week. Good win for him here. pic.twitter.com/NpQ8cYXKJj

• Nebraska's Cam Taylor-Britt made our mock draft 2.0 on Monday, as a cornerback/safety. He mostly played safety on Tuesday, and I think that's where his home will be in the NFL. Very active player, with good instincts, he had some extra competitive juice on Day 1.

I like him a lot. Jalen Pitre of Baylor did some nice things at safety but had a few obvious holds in the secondary.