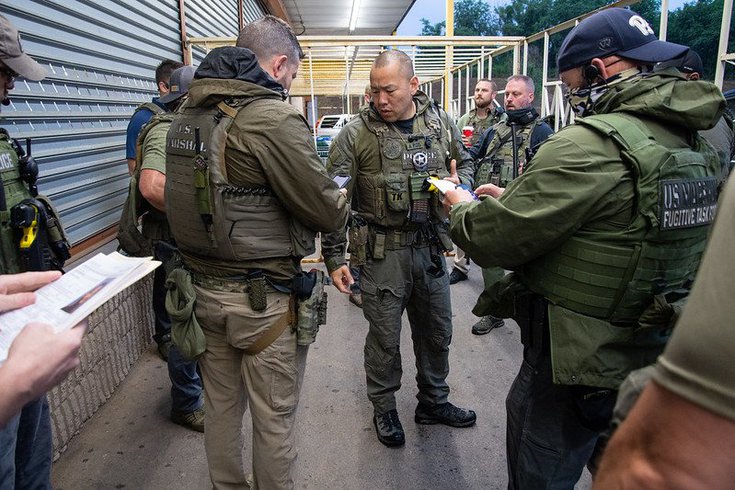 Two days after his involvement in the deadly South Street shooting that left three people dead and 11 others injured last month, Rashaan Vereen was arrested by U.S. Marshals in South Philadelphia.

Vereen, 34, allegedly took part in a fist fight that led to a chain reaction of shootings on June 4. Gregory "Japan" Jackson, who was with Vereen, opened fire on Micah Townes, investigators said. The two exchanged 17 gunshots, with Townes killing Jackson in self-defense. Vereen was charged with attempted murder and aggravated assault, among other charges.

The arrest was part of a national initiative that the U.S. Marshals conducted in June targeting violent offenders in 10 cities, including Philadelphia, with high concentrations of crime.

The Marshals arrested 85 fugitives in the Eastern District of Pennsylvania, which includes Philly, Reading, Allentown and Easton. Also among them: Al-Ashraf Khalil, 28, who allegedly set fire to a Fairhill building he owned and then attempted to flee the country. A Philadelphia firefighter, Sean Williamson, died in the blaze.

"Communities cannot prosper when they are continuously impacted by violent crime," said Eric Gartner, U.S. Marshal for the Eastern District of Pennsylvania. "This surge in our state and local fugitive enforcement mission focused on removing the violent offenders whose undesirable presence serves only to diminish the good citizens of Philadelphia."

The U.S. Marshals Service has concluded Operation North Star which resulted in the arrest of 1,501 fugitives, violent criminals, sex offenders, and self-identified gang members across 10 cities in the United States: https://t.co/z1mAOvl9Th pic.twitter.com/XDc2SZCICB

The U.S. Marshals also arrested two other suspects wanted in connection to the South Street shooting. Qaadir Dukes-Hill and Nahjee Whittington were taken into custody in Richmond, Virginia five days after the shooting. They were taken to Philadelphia to face murder charges for allegedly killing a pair of innocent bystanders during the commotion that followed the initial shooting.

Dukes-Hill, 18, of Drexel Hill, Delaware County, and Whittington, of Philadelphia, who turned 18 while he was a fugitive, shot and killed Alexis Quinn, 24, and Kris Minners, 22, respectively, investigators said.

Quran Garner, who allegedly fired several shots on South Street, including some at police officers responding to the initial shooting, also was arrested.

Violent crime in Philadelphia has surged since the onset of the COVID-19 pandemic, though it had been rising steadily for years beforehand. Homicides jumped from 356 in 2019 to 499 in 2020. Last year, they rose to 562 – a new annual high. There have been 283 this year, down 3% from this time last year.

According to CDC research, Pennsylvania had 994 homicide deaths through the first 61 days of this year, equating to 8.5 homicides per 100,000 residents.