And can someone help Charlie Day remove his shirt stain? 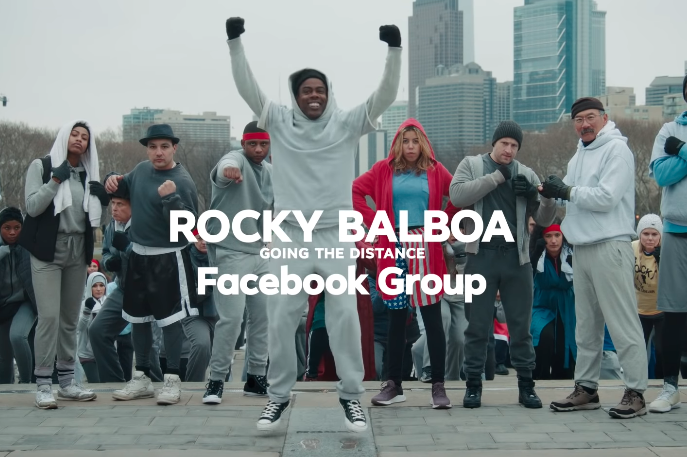 Several Super Bowl commercials rocked Philadelphia, including this Facebook ad featuring Chris Rock impersonating Rocky Balboa running up the steps of the Philly art museum. He was promptly greeted by Sylvester Stallone, with the city's skyline in the background.

The Philadelphia Eagles did not make it to Super Bowl LIV. But the broadcast still sported a slew of Philly connections, thanks to a little help from the advertisers.

But it wasn't just the game that featured a "City of Sisterly Love connection. Several ads radiated Philly energy, with everyone from World Cup winner Carli Lloyd to the fictional Rocky Balboa making appearances.

Lloyd, of Delran, South Jersey, starred in a Secret deodorant ad, titled "The Secret Kicker," that aired just minutes into the game. The spot featured an anonymous kicker booting a game-winning field goal as time expired. As the crowd goes wild, Lloyd removed her helmet, revealing the kicker's identity.

The ad attempted to trumpet gender equality, but reviews were mixed.

Facebook released its first Super Bowl ad – a minute-long spot featuring Sylvester Stallone and Chris Rock. The  commercial noted that Facebook has groups for nearly everything, from a "Front Porch" rocking group to a "Rock Buggies" group and, oh yeah, a "Rocky Balboa: Going the Distance" group.

The ad concluded with Rock impersonating the beloved Philly icon's famous run up the Philadelphia Museum of Art steps. Upon reaching the top, Rock, arms raised high, says, "Who'd you expect?" Stallone then steps into the shot, saying, "I don't know? Me?"

The ad explains why Stallone was spotted at the art museum late last year.

Jeep put forth a very apt "Groundhog Day"-themed commercial starring Bill Murray. Sure, Punxsutawney is closer to Pittsburgh, but this commercial easily ranked among the top five of the night. Also, I think we all can agree that the Punxsutawney Phil used in the ad is about as adorable as it gets. All hail, Bill Murray.

A series of Tide commercials starred Charlie Day, of "It's Always Sunny in Philadelphia," trying to determine the best time to remove a stain from his shirt. In one, The Bud Light knight makes fun of Day after the comedian accidentally time-travels to 1436. In another supporting the upcoming movie "Wonder Woman: 1984," the superhero informs Day that his stain can wait until tomorrow.