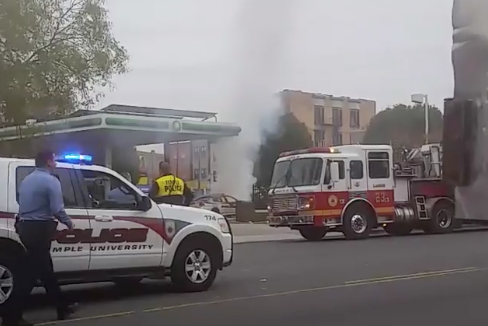 A Temple University Police car fumes with smoke after becoming engulfed in flames at a gas station Monday.

A witness told the news station that the incident occurred when one police vehicle pulled away from the BP Station near Broad Street and Girard Avenue with a gas nozzle still attached, pulling the pump over and setting a second police car on fire.

6ABC reports the fire was extinguished and no injuries have been reported, but the McDonald's attached to the gas station was forced to evacuate.

Video from Twitter user @thajmir shows the vehicle fuming with smoke as police and fire officials responded to the scene.