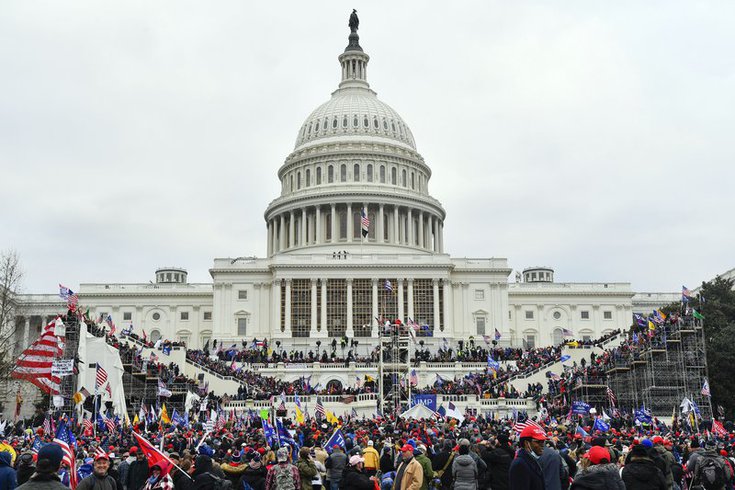 Antonio Lamotta and Joshua Macias, of Virginia, were convicted of weapons charges but cleared of election interference offenses for carrying guns near the Pennsylvania Convention Center during the 2020 presidential election vote count. Lamotta also faces criminal charges tied to the U.S. Capitol insurrection.

Two men from Virginia who were arrested for driving a weapons-filled Hummer to the Pennsylvania Convention Center where votes were being counted during the 2020 presidential election were convicted Wednesday.

Antonio Lamotta and Joshua Macias were each found guilty of two gun charges, but were cleared of election interference offenses.

Common Pleas Court Judge Lucretia Clemons found the men guilty for carrying weapons in Philadelphia without proper permits, the Inquirer reported. Lamotta and Macias were acquitted on counts including election interference and hindering performance of duty. Those charges were filed because the men told FBI agents they came to Philly to ensure votes were being counted properly.

During the trial, prosecutors discussed text messages Lamotta and Macias sent to each other and friends, imploring them to visit states with close or contested vote counts to "poll watch" and take action in an election former president Donald Trump had falsely alleged was stolen.

The men exchanged text messages about bringing guns on their trip to Philly the day before they left, prosecutors said. Assistant District Attorney Jeffrey Palmer argued the men wanted to take matters into their own hands.

Lamotta's and Macias' attorneys  — William J. Brennan, Alan Tauber, and Lauren Wimmer — argued that although they may have lacked proper permits to carry their firearms in Philly, they were licensed Virginia gun owners who did not threaten city election officials or attempt to interfere with vote counting.

Around 10 p.m. on Nov. 5, 2020, police in Norfolk, Virginia warned Philadelphia police that a group of armed individuals were traveling to Philly in a silver Hummer. Later that night, officers spotted the vehicle, which was decorated with QAnon stickers, along with Lamotta and Macias who appeared to be armed. A vehicle search yielded an AR-style rifle and 160 rounds of ammunition.

Lamotta and Macias were arrested that night on a street by the Convention Center. Prosecutors first charged them with weapons offenses, adding a set of rarely used election interference charges in 2021.

As the case neared trial, prosecutors repeatedly asked to revoke the men's bail. District Attorney Larry Krasner described the Nov. 5, 2020 incident as a potential mass shooting situation that was only averted by swift law enforcement action.

In August 2022, Lamotta was also charged with four misdemeanors tied to the Jan. 6, 2021 riot at the U.S. Capitol. Just months after the Nov. 5 incident, he forcibly entered the U.S. Capitol while a joint session of Congress was being held to certify Joe Biden as the election's winner, according to an affidavit filed by the FBI.

Macias, who founded the Veterans for Trump group – which Lamotta belongs to – met with leaders of the Proud Boys and Oath Keepers in an undisclosed parking garage the night before the Capitol riot, according to a video released by U.S. prosecutors and defense attorneys for Proud Boys leader Henry "Enrique" Tarrio. Macias has not been charged in relation to the Capitol riot.

Sentencing for the two men is scheduled for December.

“Let this be a lesson not to illegally bring firearms to Philly’s elections," Krasner said. "If you commit a crime while seeking to undermine people’s right to vote, and to have their votes appropriately counted, you will be held accountable.”