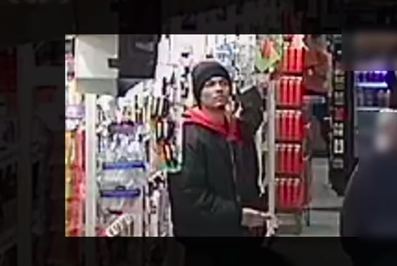 A 78-year-old woman leapt onto the hood of a car in an attempt to stop the alleged robber who had stolen her purse as she was loading a shopping cart of groceries into her vehicle, according to Philadelphia police.

The incident was caught on surveillance video and shows the alleged robbery, as well as the woman sliding off the hood of the suspect's car and falling to the ground when the driver slammed the car into reverse before fleeing the parking lot of a West Philadelphia supermarket.

Police released the video Wednesday, and investigators are looking for the unidentified suspect in the robbery, which took place in the lot of the Shop Rite at 1575 N. 52nd St. on Jan. 13.

The video shows the man leaving the store around 6 p.m., getting into his parked car in the lot and driving to where the woman was with her car. He then can be seen getting out and allegedly snatching her purse before hopping back into his vehicle.

The alleged victim jumped onto the man's car but fell off the vehicle. The suspect fled in an unknown direction, police said.

The woman was not injured. Her purse contained various credit cards, identification information and $100, police said.

Police are looking for a white man in his late 20s with a thin build, light mustache and beard. The man was shown wearing a black winter hat, black jacket, red hooded sweatshirt and tan pants.

He drove a gray four-door sedan, which may be an early model of a Hyundai Accent, police said.