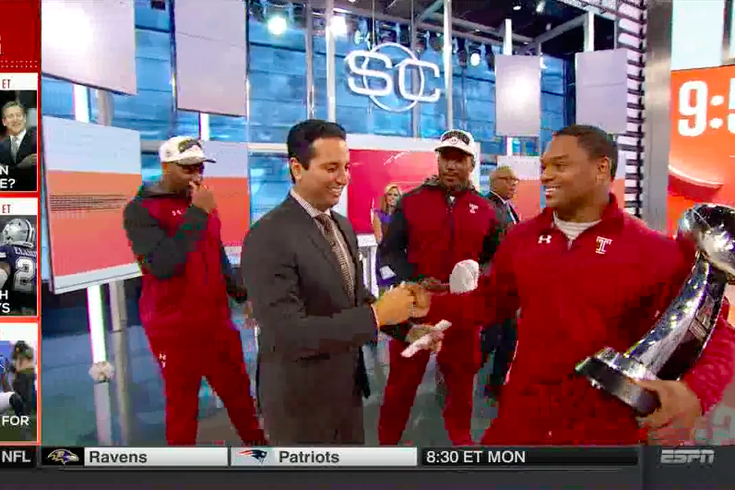 In the wake of Tuesday's news that Temple University football head coach Matt Rhule is a two-faced traitor is leaving to coach at Baylor, we Owls needed something to make us feel good again about winning the school's first conference championship since 1967.

ESPN anchor Kevin Negandhi, a Temple alum and all-around Philly fanboy, gave us a little something to smile about with his genuinely joyful reaction to senior players Avery Williams, Avery Ellis and Haason Reddick surprising him on "SportsCenter" Wednesday morning with some American Athletic Conference championship gear.

Negandhi does ask the players about Rhule leaving, and Williams had nothing bad to say about his now-former coach, saying he was happy for Rhule's family. Negandhi goes on to thank the players for helping bring respectability to a program that for years was synonymous with futility.

"I had some regrets that we couldn’t make it down to Annapolis to see the fellas, enjoy the game and celebration on Saturday," Negandhi said about the surprise. "For the Temple team and players to bring the AAC Championship trophy to Connecticut and surprise me on 'SportsCenter' was a moment I will never forget."

You can watch the surprise appearance on "SportsCenter" below: