As voiceover work globalizes, the art form endures in Philadelphia — and proves lucrative

The state of voice acting in Philly 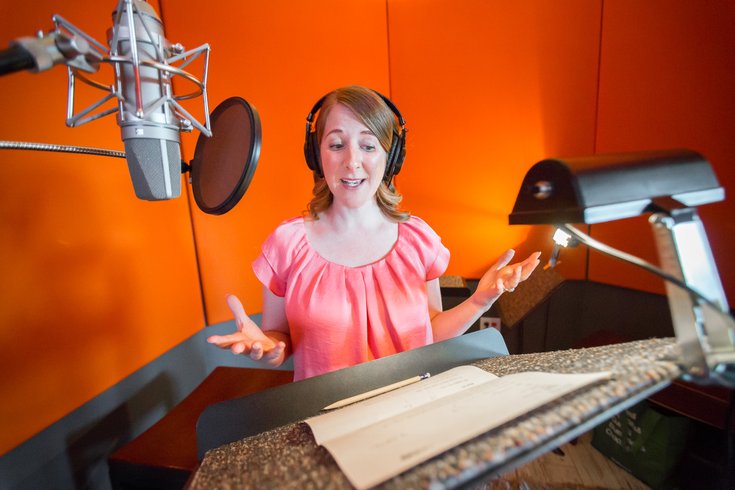 Voiceover actor Jeannie Stith reads lines from a script at the Shake Audio Post studio, which is an entity of MilkBoy.

Eighteen years ago, a fresh-faced Jeannie Stith, then a recent theater grad from DeSales University, stepped on the scene in Philadelphia for her first acting audition. Adrenaline pumping and ready to dazzle the casting crew, she suddenly found herself a tad nervous when, upon scanning the room, she spotted a gaggle of actresses who looked just like her.

Only, with a few significant — if superficial — differences.

"I’d walk into a room for an audition and be like, ‘Oh, awesome — here are 15 other girls who sort of look like me, but they all seem to be thinner and prettier," Stith told PhillyVoice. "It got to be so much about my image that, while I love acting, it feels like everyone is constantly judging my looks. It's a big deal if I gain 5 pounds."

So, she filed those moments away as learning experiences and re-evaluated. Recalling a lecture about voice acting from a college class, she started wondering if that would be a better fit — after all, she said, her goal since middle school had always been to "get in the head of a character," not necessarily be them in a physical sense.

That realization, it turned out, was a liberating one.

"When I found voiceovers, I felt like I’d been set free — 'I can still act and nobody cares,'" she said. "I can show up in my pajamas and as long as I sound good, nobody cares.”

And while the anonymity may be one reason Stith and countless other actors opt for voiceover, what may have proved the most delightful element of her epiphany was just how lucrative voiceover in Philadelphia — yes, Philly, not New York or Los Angeles — could be. While it took her a year just to get a single voiceover gig, the jobs almost immediately snowballed, resulting in a fruitful career for her in the two decades to follow: as an announcer for Sprout, the narrator for Hershey Park's TV and radio ads and a regular voice actor for Comcast's Xfinity On Demand platform.

Through these jobs, she clocks in a less-than-40-hour workweek and spends most afternoons with her daughters.

“Philly is a perfect-sized city for making a living in the voiceover world," Stith explained, pointing to the wide array of pharmaceutical and other corporate clients available locally. "There is enough work to sustain you, but there isn’t the type of competition — I know friends who auditioned for a year in New York. Every week they’d audition, and they'd get one gig a year. That doesn't pay the bills." 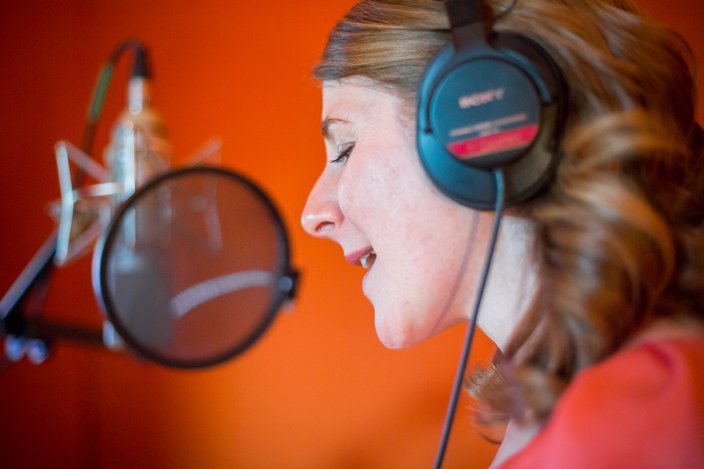 Moreover, in an effort to explain how so many voiceover artists manage to "make it," she said it's all about knowing what you're good at, rather than trying hard to imitate other voices. (Though there is a market for that.)

"You really have to know your niche," Stith explained. "Even in a market like Philly, I get hired for the same thing over and over again. I used to put all this different stuff in my demo — ‘Look at my range! I can do this with my voice. I can do the sexy girl! The shy girl.’ And immediately people started hiring me for really what I do best, which is genuinely me — this happy, cheery person.

"And it took me a long time to be OK with that."

Still, while these largely commercial jobs have been able to support actors like Stith, it's also true that they exist in an industry that is increasingly more global — and, if not now on the local level, stands to eventually be more competitive. The internet has — as it has with so many other industries — torn down walls that existed a short two decades ago, ushering in a flood of newcomers to the industry.

And, it seems, that's the running narrative for voiceover work not just in Philly right now, but in general.

"The world is now the market," Mark Schultz, co-owner of Shake Audio Post at MilkBoy recording studio in Callowhill, told PhillyVoice. "A person can live in Philadelphia, come to Shake, and be connected with a studio in London or any other place you can name."

It's been healthy for Philadelphia's voiceover scene, he argued, because now actors and engineers can live in the city and not have to factor in proximity with as much weight. It renders location virtually irrelevant, with the exception of higher-profile jobs that demand more engineering work than home studios afford.

Stith: When I found voiceovers, I felt like I’d been set free — 'I can still act and nobody cares.' I can show up in my pajamas and as long as I sound good, nobody cares.

In that case, local studios like Shake (or Baker Sound, or Philadelphia Post, etc.) are left to sell themselves on their high-quality offerings: Clients for Shake consist of well-to-do Philly agencies like Digitas, but also national celebrities like Bryan Cranston and Katy Perry, both of whom recorded there this summer.

It's a welcome change of pace for Schultz, an alum from Temple University's radio & television program in the '80s, who spent most of his career in a New York studio, largely because there was little choice otherwise. But, Schultz described the advent of digital over film, along with the rise of the internet, as major door-openers for Philly — and certainly for him.

"Loving the city as I do, I would have returned much sooner had I identified an opportunity to work at the same high level and with similar clientele as I was serving in New York," Schultz said, noting Philly has traditionally been a town of voiceover for local consumption. "It turned out I had to design and build that opportunity myself, but the final outcome is that today I mix in the most client-centric, attractive, best-sounding and technically superior studio I've ever worked in — and having come from [New York City's] Post Perfect, that is saying a lot."

On the other end of the spectrum, however, the increased number of people in the business, many of them amateurs, has posed a predicament for those who are more traditionally trained or experienced.

"Now, there’s Voice123.com and these kinds of things where clients are more apt to look all over the country for talent and willing to pay them to do it from their home," Rich Orlow, a South Jersey voice actor who's done "thousands" of commercial gigs and high-profile creative ones like "Red Dead Redemption," told PhillyVoice."That's changed a lot. I think technology has affected the business, and in that way, some of the rates have gone down by comparison — less union work than there used to be, and even, in some ways, the non-union work has generally fallen as well. Though, I usually hold to my rates."

Combine that with a "dried-up" film industry in Philly, Orlow said, and the area does have its own share of challenges. There's also a lack of commitment to professional development of new talent; you'll seldom find a university theater program devoted to the voice acting profession.

"What I find is in the U.S. we don’t teach voice acting," Joanne Joella, a Philadelphia-based vocal coach and longtime voice casting agent, told PhillyVoice. "We’re not like the Brits. Notice how many people on TV are from Australia or Britain. Their training program is far more rigorous, and it breaks my heart that so many have to go to New York to get the good talent."

An emerging problem, she added, is a mindset among up-and-comers that editing can fix breathing flaws, or that emerging job-listing sites like Voice123 can replace the standard auditioning process. It's also, she said, getting harder to discern which voice acting "classes" are legitimate.

Even Orlow half-joked that his own initial experience in training was suspect.

“Quite honestly, the person who taught me didn’t really know a whole lot about it, in my opinion," he laughed. "A lot of what I was taught was really incorrect, so I found that I did a lot of learning on the job. And I got lucky because I was able to do a lot of voices, and people took a chance on me."

All the same, there is a surprisingly untapped local market for voice actors to thrive in — one in which a healthy living can be made, so long as work is put in and training is valued.

In the months ahead, Stith will release her first book, "Hometown VO: How to Find Work in Your Own Backyard," to guide newcomers who are interested in the field but discouraged by their luck in major markets.

“I do want to help people get into the voiceover business because it’s such a nice lifestyle," Stith said. "You make a full-time income, you work half the hours other people work in a week, and you have time for other things in your life.

"To me, what more could you want from a job?"