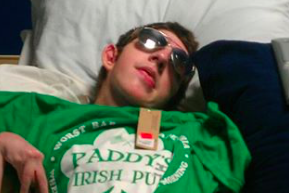 Beau Coin, of Louisville, Kentucky, is a huge fan of "It's Always Sunny in Philadelphia."

The gang on "It's Always Sunny in Philadelphia," now gearing up for a Jan. 4 premiere of their 12th season, has always come across as anything but altruistic in their foolhardy exploits. They are perhaps the most misanthropic sitcom characters to surface in the last 15 years.

We now have indisputable evidence that's all just for television.

The family of a terminally ill man in Louisville, Kentucky campaigned to have the "Always Sunny" cast reach out to 22-year-old Beau Collins, a huge fan of the series who is reaching the end of his battle with cerebral palsy.

Savannah Coin, Beau's sister, launched a social media campaign to get the gang to send her brother a video message with love and support.

"He has watched the episode where Mac and Dennis break up and Dee gets stuck in the wall with all the cats no less than 500 hundred times," Coin wrote on Facebook. "Our entire family can recite that episode from beginning to end."

Even in the rush and commotion of the holiday season, the gang was all there for Beau.