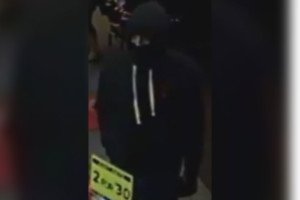 The Philadelphia Police are seeking help from the public to identify this man, who police said, was one of two individuals who robbed a City Blue store in unit Park on Dec. 20.

The Philadelphia Police are seeking help from the public to identify two men, who they say robbed a City Blue Outlet in Juniata Park on Dec. 20 armed with a handgun.

According to police, on that day at about 10:55 a.m., two males wearing masks and gloves entered the City Blue Outlet located at 3908 Kensington Avenue, displayed a handgun and demanded an employee open a cash register.

Law enforcement officials said that the gunman told the store's manager, “Don’t no one be a hero," before the men were given an undisclosed amount of money from a cash register and the store's safe.

Both men then ordered the employees to turn over their cell phones, police said, before throwing them to the rear of the store. The men then fled in a silver or tan vehicle possibly a Honda Accord, police said.

The police described the armed gunman as Hispanic, about 20 years old and standing 6 foot to 6 feet, 2 inches. He was wearing all black clothing, including gloves and a mask at the time of the robbery.

His accomplice, police said, is also Hispanic, about 20 years old, standing about 5 feet, 6 inches with a medium build. He too was wearing black clothing and a mask at the time of the incident, police said.