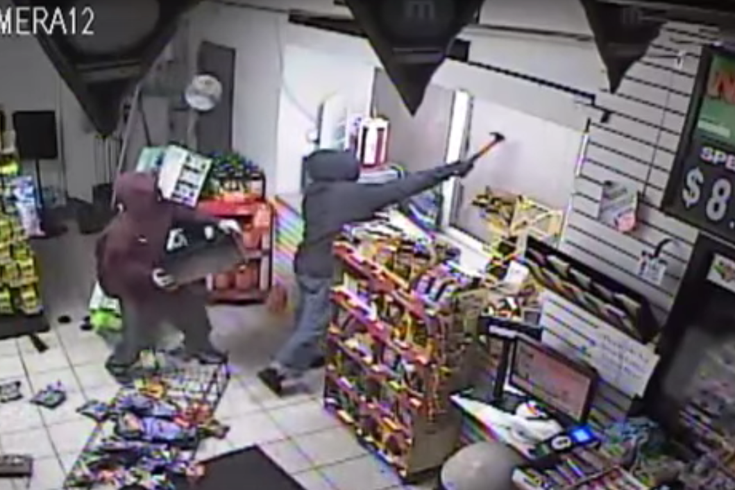 Police are searching for these two suspects for the burglary of a Juniata Park gas station.

Police are searching for two men caught on camera breaking into the convenience store of a Juniata Park gas station and trashing the place.

According to authorities, an employee of the Liberty gas station located at 900 E. Hunting Park Ave. arrived for work around 4 a.m. Sunday and saw the window was broken.

Surveillance video shows two men come in through an outdoor window and begin tossing merchandise stands to the ground.

Once inside, one of the suspects can be seen smashing the glass window at the front counter with a hammer, leaping up and kicking it until it breaks.

The burglars took cigarettes, an undetermined amount of money and lottery tickets, police say. The video shows one of the suspects taking lottery tickets one-by-one, eventually giving up and just grabbing the entire ticket dispenser.

After obtaining their loot the suspects got into a two-tone, dark-colored SUV — possibly a Chevy Trailblazer or GMC Jimmy — and drove in an unknown direction. Surveillance video of the incident can be viewed below:

Both suspects are described as white males. One was wearing a maroon hoodie, black pants and a black ski mask. The other suspect was wearing a black hoodie and blue jeans.