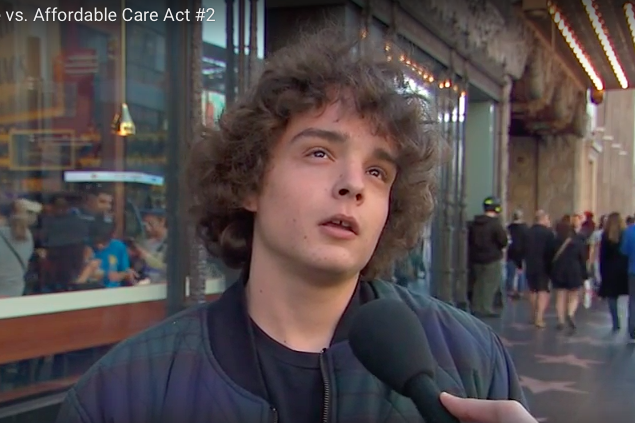 Screenshot from 'Jimmy Kimmel Live!'s' video interviews with Americans on Obamacare versus the Affordable Care Act.

A few days ago, an uninformed Facebook user’s interaction went viral after he applauded the possible repeal of Obamacare, only to find out in the comments that he actually relies on it for health care.

What made it funny? He seemingly didn’t know Obamacare is just another name for the Affordable Care Act. A screenshot of the Facebook interaction found its way onto Reddit and took off from there.

Well, thanks to Jimmy Kimmel’s man-on-the-street reporting, we now know that guy isn’t the only misinformed American out there.

As Kimmel explains in the video, he first took to the streets to quiz people on what they saw as the differences between the “two policies" back in 2013, but he revisited the question now “to see if Americans had learned everything over the last three years.”

In the video posted by "Jimmy Kimmel Live!" one woman, for example, explains that she doesn't like President Barack Obama or support anything he stands for, like Obamacare. Then, when she's asked if she supports the Affordable Care Act, she responds, "Absolutely."

Watch for yourself and try not to cringe: