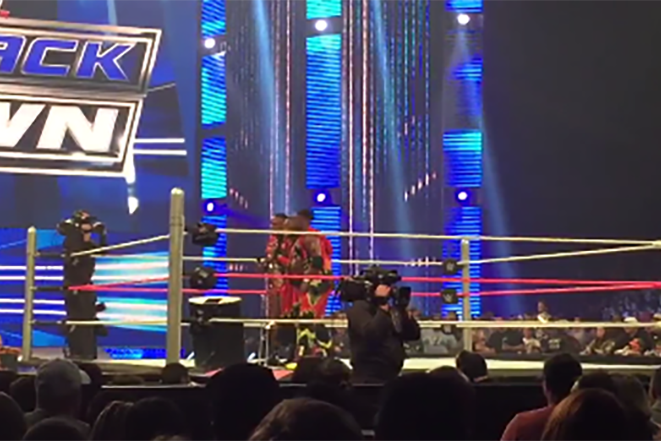 The New Day came to the Wells Fargo Center and ripped the Eagles Thursday night.

The Wells Fargo Center was the host for SmackDown Thursday night, which saw the WWE Tag Team Champions waste no time in trashing our city for some cheap heat. It worked. Another Six-Diva tag team match and a tag team main event pretty much made this feel like a glorified house show. Being there live didn’t really make a difference.

But sometimes house shows are better than television shows. This show was a lot of fun to be at live. On television? Meh.

The first 10 minutes of SmackDown was the highlight of the night. Believe me.

The New Day had another banner night for themselves on Thursday night, though the really good stuff took place as SmackDown took the air.

The trio went for some cheap heat early, talking trash on the Eagles and Chip Kelly. Xavier Woods said Philly knows nothing about being champions and laughed at the fact the Eagles lost to Washington this past weekend.

Woods said Kelly called him and asked the guys for advice on keeping positive. They then came up with a chant for our football team, “E-A-G-L-E-S BOOTY!” referring to the Eagles as our “silly little team.” The best part of the night and we were only five minutes in.

Dolph Ziggler came out and wanted a match with Big E, who cost him the United States title on Monday night against John Cena. The New Day promised it would be a fair fight, with likely their fingers and toes crossed, and Ziggler agreed because he brought out the Dudley Boyz to watch his back.

Both Woods and Kofi Kingston would provide their own color commentary at ringside during the match, despite having no microphone. Great stuff by these guys and they get better and better each week. Big E would win with help from the outside.

That wasn’t the last we’d see of the champs. After Roman Reigns and Randy Orton defeated Bray Wyatt and Braun Strowman in the night’s main event by disqualification, The New Day would come out to attack Reigns and Orton, followed by the Dudley Boyz making the save. We didn’t see this on television, however, as the show went off the air after Reigns and Orton rid the ring of Wyatt and Strowman. Ah, The perks of being there live!

Rusev wants WWE gold around his waist before giving Summer Rae the gold she wants around her finger. I’ll reserve judgment on this angle to see how it plays out for now, but my first impression is it’ll probably not end well for either party. I hope I’m wrong. Rusev would go on to lose to Ryback, so that doesn’t help the start of this angle at all.

Kevin Owens and Ryback’s feud is really lacking. The two will square off at Hell in a Cell for the Intercontinental Championship, but I’m not feeling this one. Some of it probably has to do with how Owens hasn’t been the same since his feud with Cena. I don’t know if it’s just me, but I know Owens is great on the mic and he’s a very good wrestler. Ryback does nothing for me in the Intercontinental Title picture.

As for the Divas, we got another Six-Diva tag team match that ultimately doesn’t matter. Paige apparently felt hurt that Natalya was teaming with Becky Lynch and Charlotte instead of her. Oooookay. Not sure I get this anymore. Not sure I want to get this anymore. This entire angle has gone downhill in record time.

Watch out for Stardust.

• Big E d. Dolph Ziggler by pinfall after Kingston holds Ziggler’s legs down from the outside.

• Charlotte, Becky Lynch and Natalya d. Team Bella by submission after Nikki taps out to the Figure Eight.