No one in authority – Winslow Township or the Camden County Medical Examiner's Office – has accepted responsibility for the incident, family says 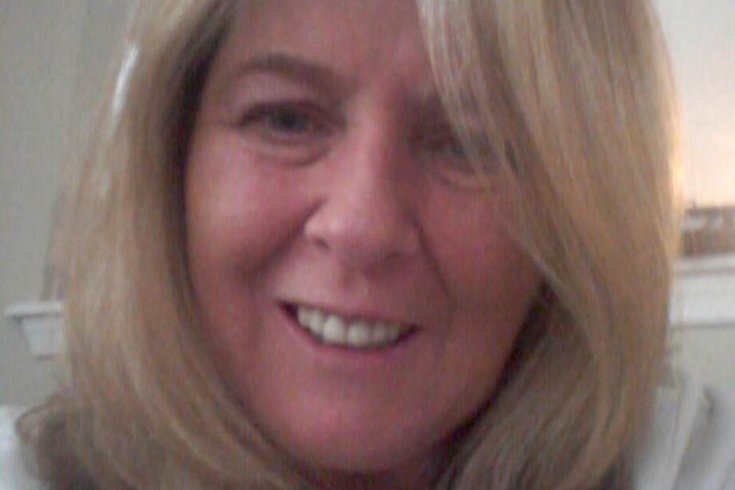 Susan Pfost died Dec. 14, 2015, in an auto accident in Winslow Township in South Jersey. The tragic crash – and its aftermath – has traumatized her family.

Two days after their mother was killed in a Dec. 14, 2015 car accident, Justin Pfost and Brittany Pfost Esposito went to the scene in Winslow Township to erect a roadside memorial.

As they located the utility pole struck by Susan Pfost's vehicle, however, they made a horrific discovery: there in the grass, just feet away, was their mother's bloody severed hand, her engagement and wedding rings still in place. In shock, an employee from a nearby business brought them a bag to pick up the hand.

That stunning discovery – and its aftermath – still gives Brittany Pfost nightmares. Unable to sleep, she is being treated for post-traumatic stress disorder.

The incident has rattled her brother so much he cannot freely talk about it.

In an email, Justin Pfost wrote, "Nobody really gave us answers or took responsibility for what had happened.  A formal apology was never made. It was mostly just brushed off as if it was nothing."

And it has shaken their dad, Don Pfost, who must drive by the crash scene routinely. 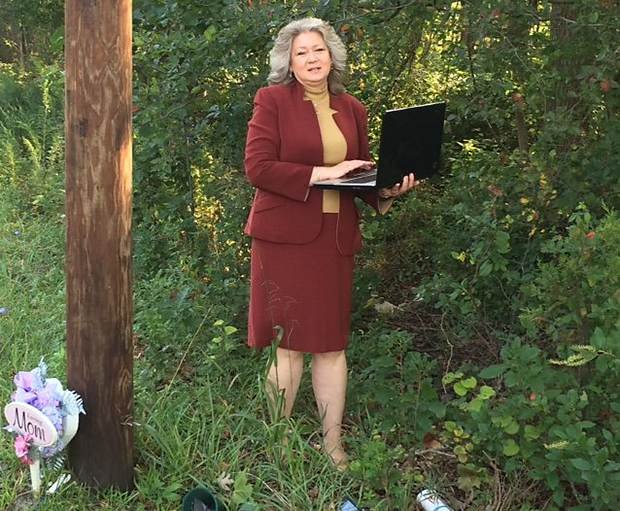 Marlton lawyer Theresa Grabowski stands near the spot along Winslow Road where Susan Pfost's severed hand was discovered. Photos taken by Winslow Township police last December at the scene – some showing the body part in the grass – were on her laptop.

'THEY SHOULD HAVE SEARCHED'

Susan Pfost, 56, died from injuries sustained when her Saturn went off Winslow Road, crashed into a utility pole and overturned shortly before 2 p.m. on that unusually warm December day. The Winslow Township woman's left hand was severed in the accident.

Investigating authorities – primarily Winslow Township police and an investigator for the medical examiner for Camden County – left the severed hand where it fell alongside Winslow Road and apparently never searched for it.

"They have no appreciation for the fact that it is not acceptable to leave a severed human hand alongside the road for two days.” – Theresa Grabowski, lawyer for Pfost family

Numerous photos taken during an investigation of the scene show the severed hand – it is visible in 7 of the 139 images – but Winslow police apparently overlooked it. In the photos, examined by PhillyVoice, the bloody hand stands out in the grass.

The discovery – and authorities' indifference to the incident – has been devastating for the family, according to Theresa Grabowski, a Marlton lawyer who has notified officials that the family may sue.

“They didn’t even have to get up. Just pop the photo disc in and there it was,” Grabowski said Thursday. “There were plenty of failures all around. A body part was missing and it should have been there. They should have searched.

"They have no appreciation for the fact that it is not acceptable to leave a severed human hand alongside the road for two days,” she added.

Police did not mention the severed hand when they came to tell Don Pfost of his wife’s death, he told PhillyVoice in an email.

After learning of the amputation from a funeral home employee, he called Winslow police, and yet no search was made for the hand, he and Grabowski said.

Eric Riso, a lawyer for Winslow, confirmed he is aware of the incident. “I don’t think Winslow Township employees did anything wrong,” he said. 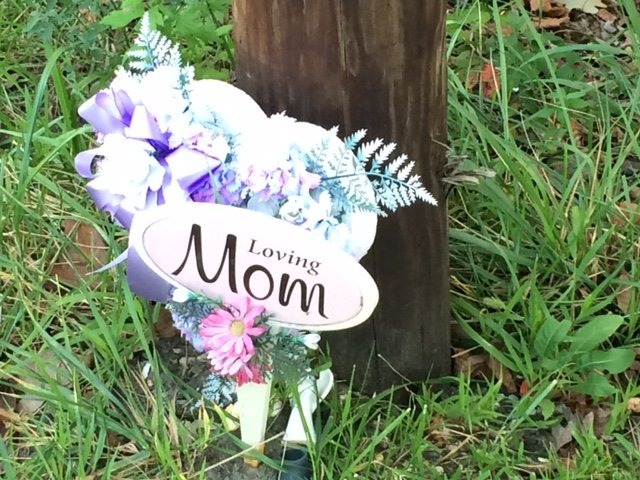 This memorial was placed at the scene of the wreck which killed Susan Pfost by her children.Her bloody severed left hand was discovered a few feet away by her children two days later as they placed the memorial.

Patrick Daley, an investigator with the Medical Examiner’s Office shared by Camden, Salem and Gloucester counties, apparently overlooked the severed hand, even though his job is to investigate death scenes.

Daley’s official notes from the scene state that Pfost was wearing her seatbelt. He also noted that her car struck landscaping bricks surrounding a sign, crashed into a utility pole and came to rest on its roof.

But Daley makes no mention of any Pfost's injuries, let alone her missing left hand.

His official report concludes: “crash under investigation by the Winslow PD, body removed from the scene by Daley for examination by Feigin.”

Pathologist Dr. Gerald Feigin, the medical examiner and Daley's boss, pronounced Pfost dead at 5:30 p.m. on the day of the crash.

Feigin’s autopsy found multiple fractured ribs, multiple contusions, multiple left arm fractures, contusions on her feet and the amputation of all the fingers on her left hand, except the thumb.

The autopsy report, however, makes no mention that Pfost’s severed digits were not recovered from the scene. Nor does it mention any need to recover the missing digits.

Daley did not respond to a request for comment.

But at his family’s funeral home in Swedesboro, Gloucester County, an employee was clearly aware of the incident, referring to Pfost as “the fingers lady.”

Deb Selitto, a spokeswoman for Gloucester County, declined comment on the work of Daley and Feigin. She instead referred questions to the Camden County Prosecutor’s Office.

A spokesman for the Camden County prosecutor, however, said the office had not handled the case.

Feigin is the pathologist in the Brendan Creato case in Camden County. The boy’s dad, DJ Creato, is accused of murdering his son. The case is listed for trial in October.

In the Creato case, the scene investigation by Feigin and his office has been criticized by independent experts. In her communications with Winslow Township regarding a possible lawsuit, Grabowski cites another Feigin autopsy case where courts found he did a shoddy autopsy.

Falzon, does, though, by state law, exercise oversight over all county medical examiners, including Feigin.