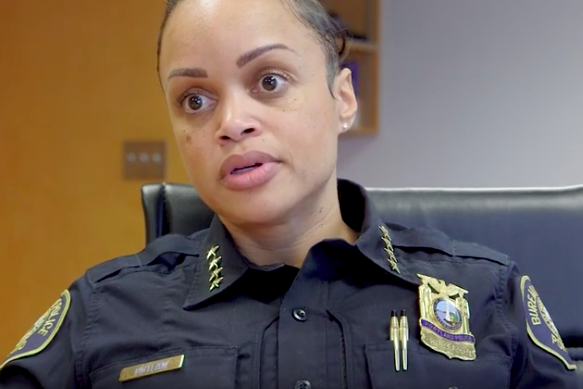 Danielle Outlaw began her tenure as Philadelphia police chief on Monday, and she made history as the first African-American woman to lead the department. But a lot of issues face the city and police force as the 43-year-old Outlaw takes over.

Danielle Outlaw made history Monday as she became the first African-American woman to assume the mantle of Philadelphia police commissioner.

The 43-year-old Outlaw, who left her job as police commissioner in Portland, Oregon, to come here, was appointed by Mayor Jim Kenney in December following a four-month search. She reported for her first day on the job at 5:45 a.m., according to 6ABC.

"I get an opportunity to meet everybody, hit some roll calls," Outlaw said as she left police headquarters Monday morning. Outlaw is most looking forward to "just some face time" and getting an opportunity "to know who's out here getting the work done and for them to have an opportunity to see me," she said.

Outlaw replaces Richard Ross, who resigned as police commissioner in August amid allegations of sexual misconduct. Deputy Commissioner Christine Coulter has been filling in during the last six months.

Outlaw comes to Philly with over 20 years of experience in law enforcement. Her career began as a patrol officer in Oakland, California, where she eventually became the city’s deputy chief of police. She then was appointed as the first African-American woman to be Portland police commissioner in 2017.

As Portland’s chief, Outlaw focused crime strategies on individual precincts to reduce crime and reformed the city’s use of force policies, especially for those suffering from mental illness.

But Outlaw’s work is cut out for her as she takes over in Philadelphia. The city is facing rising homicide rates and fatal shootings during the last few years, and the police department is seeking to address issues of racism within the department.

The Philadelphia Police Department has also hired an independent firm to investigate the allegations of harassment and discrimination after Ross was accused of failing to respond forcefully to claims of harassment against other men on the police force that were reported by two female officers.