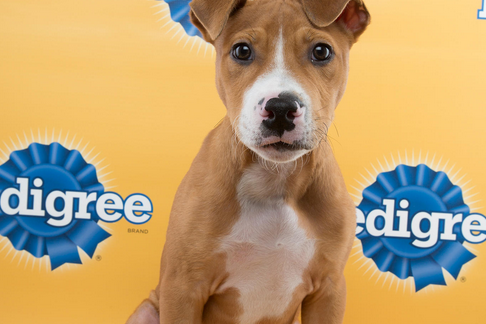 Jamison, of Downingtown, was drafted for the Puppy Bowl.

Despite the New England Patriots taking on the Seattle Seahawks, Philadelphia will be represented Sunday — in the cutest way possible.

Meet Jamison. The Pit Bull Terrier mix is originally from New Jersey — more specifically, New Life Animal Rescue in Evesham — but moved to Downingtown in October to live with his new family, Meghan and Ryan Corey.

According to the Burlington County Times, Jamison is tough — he came to the shelter at 3 weeks old and was severely underweight, suffered from seizures and had low blood sugar. He overcame those circumstances, however, with the help of Kim Mangione, head of New Life. Mangione fostered the pup and told Animal Planet that Jamison would be perfect for the draft.

Jamison will have Mangione — and her five children who miss him dearly —  rooting for him.

The Times Herald reports that Jamison, now 6 months old, is one of nearly 300 dogs saved by New Life Animal Rescue during its three years of operation.

“He needed a lot of TLC and medical care,” Mangione said of Jamison's recovery, but also remarked that he seemed "thankful, relieved."

Watch Jamison in action at Puppy Bowl XI, which airs this afternoon from 3-5 p.m. ET on Animal Planet.