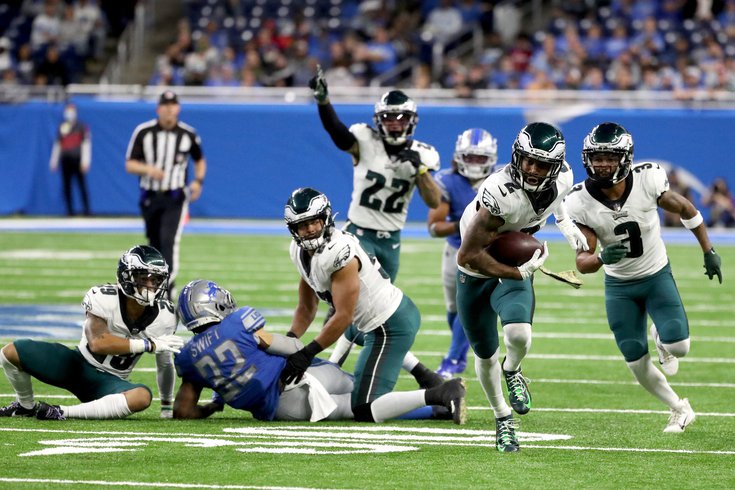 Eagles CB Darius Slay runs back a fumble against the Lions last season.

The wait is over.

The Eagles will finally kick off the 2022 season in Detroit against the Lions today, offering our first good look at a revamped roster looking to build on last year's run to the playoffs.

It's been a long two weeks between today and the final preseason game down in Miami, and a lot that's been said and written during that span.

Catch up on all of our Week 1 Eagles-Lions coverage below to get up to speed or get a quick refresher on the latest before the new campaign gets underway.

• Staff picks: Will the Lions be better than last year's three-win season? Maybe, but any improvements Detroit brings shouldn't be enough to make up for the gap in talent between rosters. We all like the Eagles to start 1-0 here.

• Expert picks roundup: The majority of the football world feels the same. The Eagles are an overwhelming favorite for their Week 1 matchup.

• Injury report: And they're fully healthy for it too. Everyone listed on the Eagles' injury report was a full participant in practice on Friday and should be good to go today. Additionally, WR Britain Covey and TE Noah Togiai were called up from the practice squad. Covey will see action on punt returns against the Lions.

• Matchups to watch: The Eagles' running game torched the Lions last season. Is a repeat performance on deck? Jimmy Kempski with a look at five matchups to watch in today's game.

• Over/unders: Speaking of last year's dominant day on the ground, can the Eagles top 200 rushing yards? Can they cover the spread? Will A.J. Brown haul in his first touchdown as an Eagle? Shamus Clancy takes a look at five over/unders for today's game.

• Offensive identity: The Eagles' offense made a shift into the league's best rushing attack and rode that way all the way to the playoffs. But with a receiving corps headlined by DeVonta Smith, A.J. Brown, and tight end Dallas Goedert, along with the hope that Jalen Hurts will take a step forward as a passer, how can the offense be expected to operate this season? Shamus Clancy goes into the numbers.

• BG's big day: Brandon Graham will be playing his first game since suffering an Achilles tear nearly a year ago, and he'll be doing it in front of his hometown crowd. "It's so funny how things work out the way they do," the veteran defensive end said.

• Captain Slay: Darius Slay is also making a return to Detroit to face his former team, and when he takes the field, he'll do so with a captain's 'C' on his chest for the first time in his career. "It's a blessing to be honored that," Slay said.

• No excuses: The Eagles are going into 2022 with one of the NFL's best offensive lines returning and plenty of weapons for Jalen Hurts to utilize. He has arguably the best possible circumstances to progress as a passer, so no one should make excuses for him if he doesn't, writes guest columnist Tyrone Johnson.

• Mailbag: From the offensive line backups to to the team's best trash talkers, Jimmy Kempski answers fans' questions ahead of Week 1.

• That stings: A.J. Brown was stung by a bee ahead of Friday's practice. Turns out he's allergic and needed an EpiPen. It was a quick-fix problem, luckily, and he was able to continue working with the rest of the team. He's good to go against Detroit.

• "Hard Knocks" scouting report: The Lions were this year's subject of HBO's "Hard Knocks," offering a good behind-the-scenes look into a team looking to finally build something substantial under head coach Dan Campbell. Evan Macy wrote about what was learned of the Eagles' Week 1 opponent from the show.

• Week 1 rooting guide: Not much in the NFL happens in isolation. The Eagles have their game today and a bunch of other external storylines that could affect them down the line. The Saints kick off against the Falcons today too. The Eagles have the New Orleans' 2023 first-round draft pick. Yeah, we're on pick watch. Jimmy Kempski looked at that and other points of interest in a non-Eagles rooting guide for Week 1.