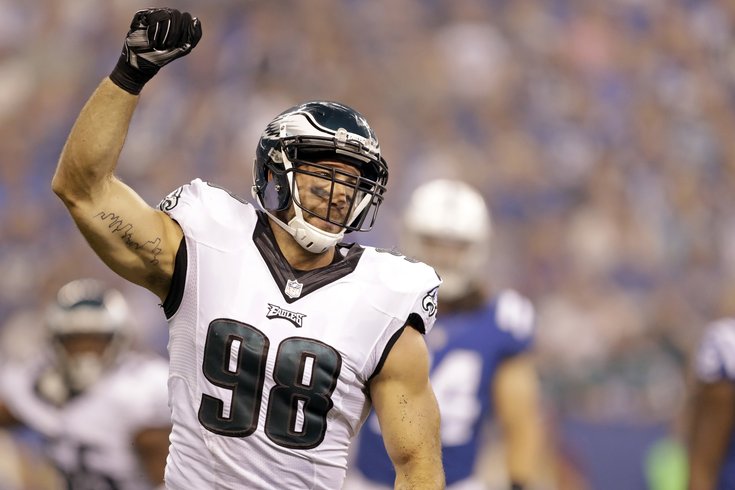 It's here, probably earlier than you expect, but it's here nonetheless. Football. Eagles season. The Doug Pederson Era. Carson Wentz.

Hopefully, there won't be much of a let down for Eagles fans. That's the thing about starting your season against Cleveland. If you win, well it's only the Browns. And if you lose, OMG he lost to the Browns. Hopefully, the actual reaction is slightly better than that, but that's really up to the rookie.

We've already given our predictions for the season, both for the Eagles and the NFL as a whole. We've also got some matchups to watch Sunday, as well as Jimmy's picks for every Week 1 game. And don't forget our five Wentz-specific over/unders for the Browns game.

Oh, and if you're not already excited, maybe the Eagles' 2016 hype video can help you out.

Anyway, here's how we see the game going down.

Yes, the Eagles are starting a rookie quarterback who missed all but about two quarters of the preseason, and yes, said quarterback is making a huge leap from an FCS college to the pros. That's unquestionably why the line is just 3.5 against this junk Browns team. However, as we pointed out in our five matchups to watch, the Eagles have matchup advantages in three important areas:

1) In games Browns quarterback Robert Griffin III played the majority of the snaps in 2014, the Redskins went 1-6. He threw four TD passes on the season, was picked off 6 times, fumbled 9 times and was sacked 33 times. 33 sacks and nine fumbles in seven games is insane. The Eagles' talented front four should be able to get after one of the slowest decision-making quarterbacks in the NFL.

2) The Browns were 28th in the NFL in sacks last season, with 29 of them. Worse, their two sack leaders a year ago – Desmond Bryant (6 sacks) and Armonty Bryant (5.5 sacks) – will both be out. There may not be a more favorable team in the NFL for Wentz to start his career against.

3) The Browns have 17 rookies on their roster and 10 second-year players. That means that a minimum of 10 rookies will be active on Week 1 of an NFL game, which should give the Eagles a huge advantage on special teams, and elsewhere.

If the Eagles can't take care of business at home against this junk team, it could be a loooooong season. Birds 23-14.

Basketball and football don’t have the exact same roster building principles, but I respect that the Browns are taking the Sam Hinkie route and trying to build from the ground up. For what has been a truly bad franchise for a long time, Sashi Brown and Cleveland’s front office definitely has a fresh approach. Taking the long view allows you to make excellent value moves such as trading a punter for a fourth-round pick.

As anyone who watched the Sixers over the last three seasons can attest to, the present of a long rebuild is tough. And the Browns are more or less the NFL’s version of the Process-era Sixers.

This is the perfect team to break in a rookie QB against, and no matter what Carson Wentz says, he’ll want to prove Hue Jackson and the Browns wrong for passing on him. Cleveland got a tremendous haul from the Eagles in April, but they wouldn’t have traded the pick if they truly believed in Wentz.

Run the ball, stay away from Joe Haden, and get after RG3 with the front four. This should be a win.

It's only been a few years since the Eagles have opened a season against the Browns; they beat Cleveland 17-16 in Week 1 back in 2012, Andy Reid's final season with the Eagles. And even that year, one that saw the Birds finish with just four wins -- it was their lowest win total since 1998, when Ray Rhodes was still at the helm -- they were able to beat the Browns, albeit a fourth-quarter comeback.

This time around, it's the beginning of an era rather than the end. At least that's the hope. Expectations, whether right or wrong, are high when it comes to rookie Carson Wentz. And surprisingly, rookie quarterbacks don't have as bad a record as you might think when starting their team's opener.

But Wentz won't have to be spectacular for the Eagles to win. Nearly a third of the Browns roster is made up of rookies. Add in all the new players they brought in this offseason, including Robert Griffin III, and nearly half of the guys on their active roster weren't on the team a year ago. That alone should level the playing field.

Then we get to the Eagles defense. Not only is it the strength of Doug Pederson's team, but it'll also be the best unit on the field Sunday. If they can force RGIII into mistakes and create a few turnovers, something they showed an ability to do this preseason, that should make life easier for Wentz. And if they can get a score of their own, even better. I think they're front four is going to terrorize the Browns line (and Griffin) all afternoon, and because of that, the Carson Wentz/Doug Pederson Era gets off to a positive start.