Ryan Gosling honors Viner, who died from cancer, by eating his cereal 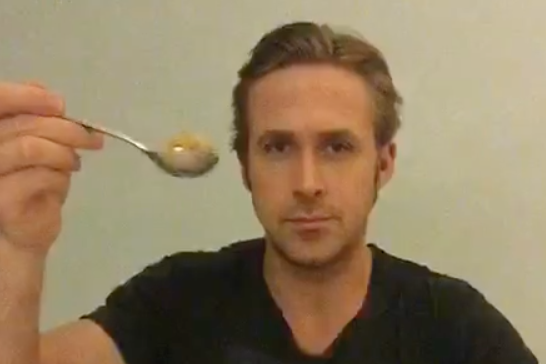 McHenry started a series of videos on the app showing him holding a spoonful of cereal to the actor's mouth on the screen in movies he appeared in, timing it at a moment where it appears Gosling refuses the food.

His series went viral. Yet shortly after the videos started taking off, McHenry received some bad news. In June of 2013, he was told that he had been diagnosed with cancer at the age of 25.

I got told yesterday that I have cancer. I would just like to let you all know I'm staying positive and I'm going to fight it. Fuck Cancer.

McHenry explained in an interview with the Verge that the enjoyment the videos brought to his audiences helped him stay positive throughout his battle with the disease. Over the next two years, McHenry continued posting videos in the series, as well as updates on his treatment.

Gosling was aware of the videos and was even asked about them during a recent interview for his upcoming film "Lost River." McHenry used the clip to add to the series.

McHenry lost his battle with cancer Sunday at the age of 27. His death was confirmed by Vine's company account.

Your creativity brightened many lives. Thank you. You'll be missed 💚 #RIPRyanMcHenry https://t.co/po2qDpHmT4

In memory of McHenry, Gosling created his own Vine account and posted a video of him finally eating his cereal. The video now has more than 22 million views.

My heart goes out to all of Ryan McHenry's family and friends. Feel very lucky to have been apart of his life in some small way.