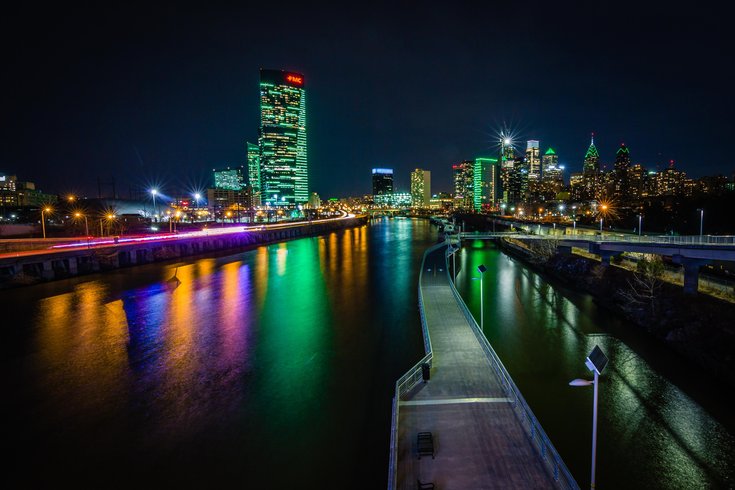 Dave Rosenblum captured the green-lit skyline on Philadelphia and posted it to Reddit. A commenter noted that the Comcast Center was did not get the green light.

Eagles fans aren't the only ones wearing their hearts on their sleeves these days.

The Philadelphia skyline is too.

From Boathouse Row to the Benjamin Franklin Bridge, virtually the entire skyline is decked out in a dazzling display of green lights – all to celebrate the Eagles' exhilarating run to Super Bowl LII.

Nearly everyone, it seems, but Comcast has joined the party. The city's two tallest buildings – the Comcast Center and the nearly-complete Comcast Technology Center – are not lit up in green.

"Comcast just don't like the Eagles," joked John Gattuso, a senior vice president of Liberty Property Trust, developer of both towers. "A lot of our management is Patriots fans. That's basically the reason for it."

The real reason for that absence is by design – quite literally.

"The building architecture in both the first and second buildings do not have the ability to change color," Gattuso said. "That was an intentional decision."

Both Robert A. M. Stern, the architectural firm that designed the first tower, and Foster and Partners, which designed the second skyscraper, preferred a more "elegant" lighting scheme, Gattuso said.

That's why the Comcast Center, completed in 2008 at a cost of $540 million, only ever lights up white. The new, $1.5 billion tower also will maintain white lighting, which will radiate along its western spine and lantern top.

Initially, the Comcast Center had the capability to light a stripe of colored lights at the very top, Gattuso said. But no one liked the way it looked, so it was removed.

Yet, Liberty Property Trust is exploring the possibility of adding the capability to light multiple colors as part of an upcoming retrofitting of the skyscraper, Gattuso said. But a final decision has not been made.

Still, the Philly skyline remains quite a sight, particularly for drivers traveling along the Schuylkill Expressway.

In Center City, the Liberty towers and Three Logan Square compliment the BNY Mellon Center – the skyscraper with the pyramid top – in adorning some of Philly's highest points with a splash of green.

Elsewhere in the city, the Lit Brothers Building, the PSFS sign atop the Loews Philadelphia Hotel and several buildings on South Broad Street have joined the celebration.

Though the Comcast Center is not bathed in green, it might be helping the Eagles in their own way.

Workers placed a miniature statue of William Penn atop the Comcast Technology Center last year, hoping to give the Philadelphia founder the best view of the city – and keep Philly's professional sports teams free of any curses.

After all, it worked in 2008, when a mini statue was placed atop the newly-completed Comcast Center, then the tallest building in the city. The Phillies won the World Series, ending the city's 25-year championship drought and snapping the so-called "Curse of Billy Penn."