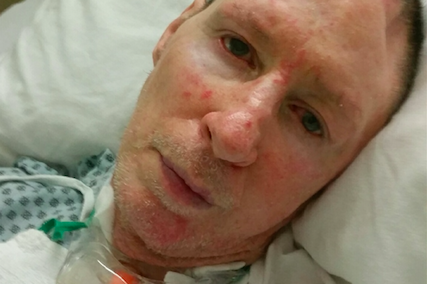 Robert Barnes was brutally attacked in April outside a gas station in Olney. He died on Nov. 25.

For seven months, Diane Barnes wondered if her brother Bobby could hear what she was saying, and whether he would ever be able to respond to her words.

Bobby, 51, had been brutally attacked outside a Sunoco gas station in Olney on April 7, in an incident that was caught by surveillance cameras. He remained in a “vegetative state” until he died last Wednesday, Nov. 25.

Today, Nov. 30, his body will be cremated, according to his sister. On Saturday, she expects a funeral to be held at St. John the Baptist Catholic Church in Manayunk.

Suffice it to say, this is a painful time for the Barnes family.

“Most people believe life was not that great for my brother living on the streets and suffering from alcoholism. Some may even think that peace which comes from death may be better than suffering like he was. I am here to tell you that my brother truly loved life.” – Diane Barnes

They now find themselves awaiting word from the Philadelphia District Attorney’s Office as to whether aggravated assault and other charges will be upgraded to homicide against three adults awaiting trial and three youths already sentenced in connection with the case.

“I hope and pray that we get justice for Bob. They should all be charged with murder, even the juveniles,” Diane Barnes told PhillyVoice at her Montgomery County home on Sunday. “My sister and I will be there until the end, and we won’t stop fighting.”

She also noted that contrary to local TV-news reports about the case, her brother was not a military veteran.

While Diane Barnes said she hadn’t heard from investigators or prosecutors as of Sunday afternoon, Cameron Kline, spokesman for the DA’s Office, told PhillyVoice, “The Office is looking at the case and has not yet made a decision if we will be updating charges. We'll let you know when we know more.”

The suspects are accused of attacking Barnes, a Roxborough native, outside a Sunoco gas station at Fifth Street and Somerville Avenue. Footage from nearby surveillance cameras allegedly shows the group beating Barnes with their feet and fists, a hammer, a piece of wood and pepper spray.

Three youths – a 12-year-old girl and 13- and 14-year-old boys – were sentenced on assault charges in July.

The cases against three adult women believed to be involved – Aleathea Gillard, the 34-year-old mother of the two youngest defendants; Shareena Joachim, 23; and Kaisha Duggins, 24 – were already scheduled for a status hearing on Dec. 4. It remains to be seen how this news affects those hearings.

The assault was allegedly precipitated by Gillard's 10-year-old son claiming Barnes hit him during an argument about who would pump gas for customers, an allegation that investigators later dismissed.

Investigators said they later learned that he fell off his bicycle on the way home and made up a story to avoid getting in trouble for being late.

While Diane Barnes struggles to come to terms with losing her brother, she hopes to make something positive result from it.

On Sunday, the family launched a GoFundMe campaign on Facebook to help defray the cost of funeral expenses and will soon launch a campaign that would provide the homeless in Philadelphia with sneakers and boots as the cold winter months approach.

The idea was inspired by Bobby Barnes telling his sister about the regularity with which the homeless need to replace their sneakers.

“Most people believe life was not that great for my brother living on the streets and suffering from alcoholism,” she said. “Some may even think that peace which comes from death may be better than suffering like he was. I am here to tell you that my brother truly loved life.”