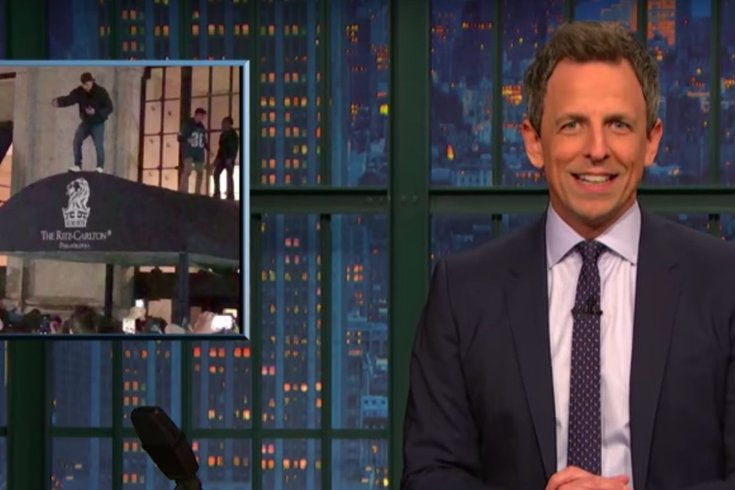 The chaos that ensued Sunday night after the Philadelphia Eagles sealed its first-ever Super Bowl win was almost too insane to believe: flipped cars, broken hotel awnings, and a keg at City Hall (good thing we have pictures).

During the late-night comedy circuit Monday, multiple hosts offered their own take on the city’s outrageous celebrations. During “The Late Show with Stephen Colbert,” Colbert joked it was hard to tell who won the Super Bowl based on footage of Philly streets, showing a clip of a street fire.

“That was a screaming inferno of joy,” he said. “There was so much fire and joy I thought I was watching ‘This Is Us.’”

Seth Meyers also teased Philadelphians during “Late Night,” saying, “According to coach Doug Peterson, last night’s trick touchdown pass to Eagles quarterback Nick Foles was nicknamed ‘The Philly Special.’ It replaces the old Philly special – barfing a cheesesteak into a trash can while people whip batteries at you.”

Meyers went on to say, “Dozens of Eagles fans were seen stage-diving off the awning of the Philadelphia Ritz-Carlton after last night’s Super Bowl win. But don’t worry, they died.”

On “The Daily Show,” Trevor Noah showed the footage of Philadelphia – post-Super Bowl – played with the audio of the dramatic new “Westworld” season two trailer.

Finally, James Cordon on “The Late Late Show” recapped the city madness: “Everyone in Philadelphia was a winner last night, they really were, unless your car was parked at the intersection of Broad Street and Chestnut.”