After being traded for Noah Syndergaard, the former Phils top prospect is getting an extended chance to play in Anaheim. 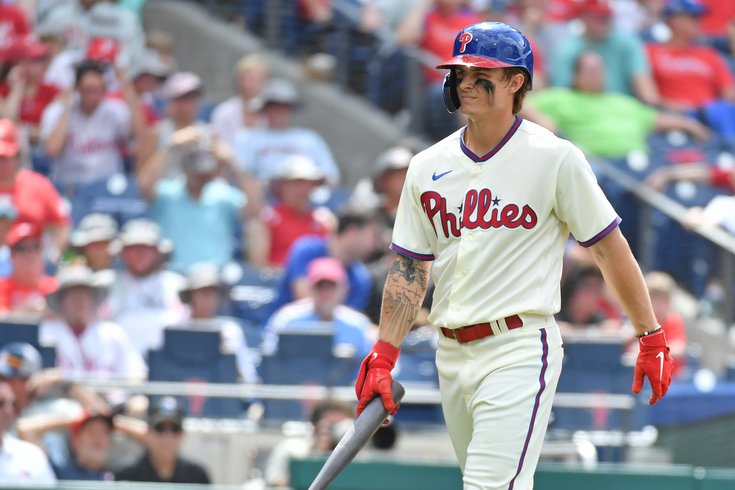 Noah Syndergaard will make his Phillies debut Thursday night when he takes the mound in the series opener against the Nationals.

Mickey Moniak, who was sent to the Angels in the last-minute deadline deal, has already gotten going out in Anaheim.

With Mike Trout out due to a back injury, Moniak was thrown into the lineup right away, starting in center field Wednesday night against Oakland.

A forgettable night, but for the former top draft pick, hopefully just the beginning of an extended opportunity to play.

“Looking back on my time in Philadelphia, I was grateful for it,” Moniak said after arriving in Anaheim on Wednesday. “Given the chance as an 18-year-old kid, came up with them, debuted with them. But I think that, for me, I’ve always been a guy that maybe takes a little bit to get comfortable at every level, and once I get comfortable, it’s on from there."

"I wasn’t really given that opportunity there, which makes sense. they're always in a pennant hunt with a lot of money on the field, so just to be here and be told that you're gonna go out and play and have some fun is huge."

Moniak, who is a Southern California native, was taken first overall by the Phillies in the 2016 draft with the hopes that he would eventually become the club's everyday center fielder.

Unfortunately, he never quite found stable footing on his way up through the Phillies' farm system, and after receiving his first big-league call-up during the COVID-shortened 2020 season, hit just .129 with a .386 OPS in 47 games since.

The 24-year-old did look to have turned a major corner with an incredible spring training heading into 2022, but a broken hand suffered right before Opening Day brought that run to a screeching halt.

When he came back, that touch at the plate was gone, and with the Phillies chasing a playoff spot – and in need of immediate reliability out in center – it was time for both to move on.

"I think in Mickey's case, we really like Mickey," Phillies president Dave Dombrowski said after the trade deadline Tuesday night. "I think he still has a chance to be a good player.

"He may benefit himself, and I told him this when I talked to him on the phone, a change of scenery will not be harmful for him."

Especially if it can afford him the time.