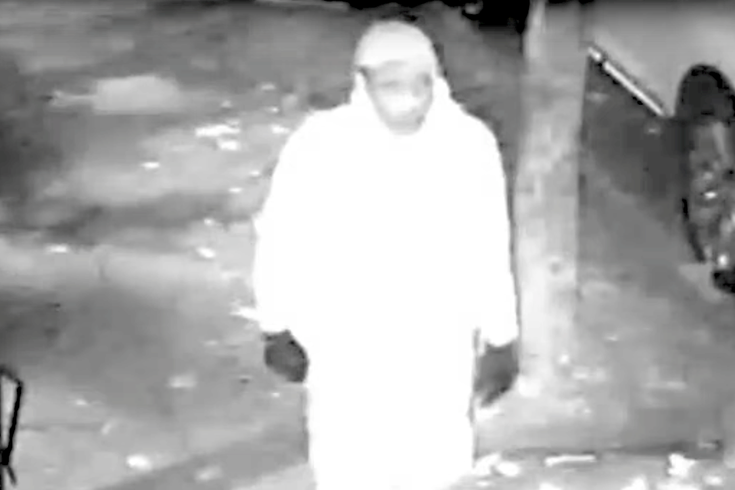 Police released video Thursday, Nov. 10, 2016, showing a man they say is the suspect wanted for racist Donald Trump graffiti painted on a car and building in South Philadelphia.

Philadelphia police have released surveillance video of a man wanted for politically and racially charged vandalism in South Philly.

Police said the suspect is responsible for spray-painted messages that appeared on the 900 block of South Sixth Street on Wednesday.

Around 5 a.m.., three vehicles and one house were spray-painted, each in black, with messages that read “Trump Rules,” “Trump Rules Black B---h” and the letter “T.”

Video of the suspect and still images of the graffiti can be viewed below:

Discovery of the vandalism came just hours after police were alerted to a pair of swastikas spray-painted on another building in South Philadelphia.

Police were called to the former Meglio Furs property at 1300 S. Broad St., where an an unknown suspect or suspects had scribbled the swastikas along with the word "Trump" and the German phrase "Sieg Heil 2016," which translates as "Hail Victory" in English.

A third incident was reported at Broad and Reed Streets shortly after 1 p.m. Responding officers found a swastika spray-painted over the word "Trump" on a utility box.

Police did not say that the incidents were all related.

In response to the  incident at the former Meglio Furs property, Philadelphia Mayor Jim Kenney issued a statement strongly condemning the acts.

“As I said in my statement to residents today, in the wake of the election, Philadelphians must work tirelessly to bridge the divides that have plagued this nation for decades," he said. "I know that many residents are planning to take part in vigils and rallies tonight and in the days ahead, and I urge you to gather respectfully and peacefully."

The Philadelphia Anti-Defamation League also decried the graffiti but suggested the initial incident should be viewed as an isolated matter.

All three acts of vandalism are under investigation by South Detectives. 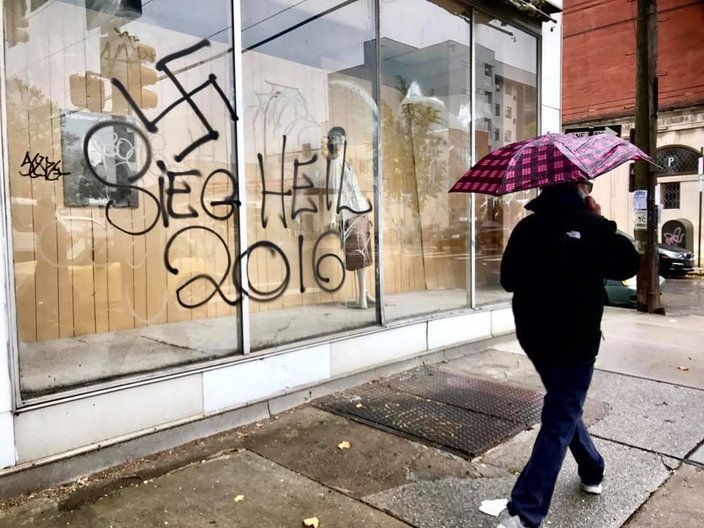 This photo shows one of two swastikas that were spray-painted on the window of a closed business at 1300 S. Broad St. in South Philly. The phrase “Sieg Heil” is German and translated it means “Hail Victory.” It was a common chant at political rallies in Nazi Germany during the 1930s.

Police described the suspect wanted for the vandalism on South Sixth Street as a male of unknown race with a medium build. He was last seen wearing a baseball hat, a light-colored jacket with a reflective strip on the shoulders, light-colored pants, black gloves and white sneakers.

Tips can also be submitted by texting 773847 or by submitting an online form. All tips will remain anonymous.