Large I-76 pileup among numerous crashes after morning snow 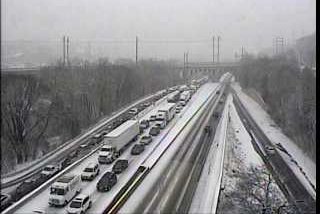 A traffic camera on I-76 near Belmont Avenue shows westbound traffic slowed to a crawl amid a Saturday morning dusting. The snow, combined with bitter temperatures, caused a number of multi-car crashes on I-76, including three involving more than eight cars.

A slippery mix of bitter temperatures and a coating of powdery snow on Saturday morning led to a number of multi-car accidents across the Philadelphia region.

One pileup involved more than 15 cars on the Schuylkill Expressway in Gulph Mills between exits 331A (I-476 South) and 330 (Route 320). There were several injuries in the westbound crash but no further details as of late Saturday morning, 6ABC reported.

Another crash on I-76 westbound closed all lanes between Exit 337 (Gladwyne) and Exit 332 (Route 23) in Conshohocken.

There was no word on whether anyone was seriously hurt.