And the conference winners will be ...

For the gambling degenerates, here are our NFL conference championship playoff picks. Both the Pats and Seahawks are favored by a touchdown each.

The Pats rolled the Colts in the playoffs last year, as Andrew Luck threw four interceptions, two of which led to short Patriots touchdown drives. Luck is becoming one of the best players in the world, and he took his game to a new level in 2014.

But it's really hard to bet against the Pats at home. Here is what they have done at Gillette Stadium the last two seasons: 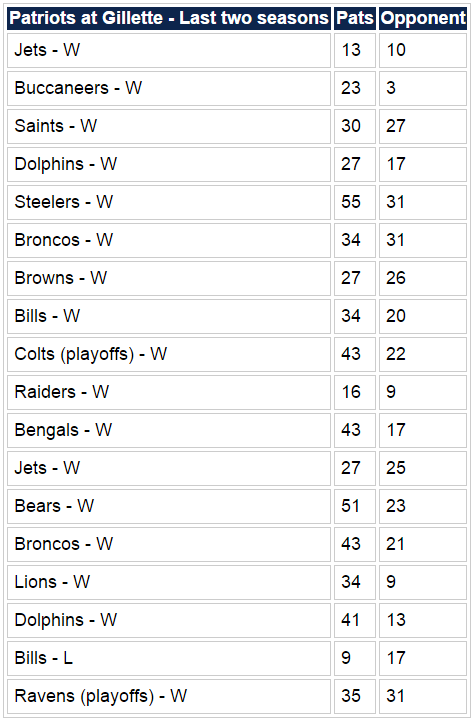 That one loss was a meaningless Week 17 game in which the Pats rested their starters because they were locked into their playoff seed. If you take away that meaningless loss, they're undefeated. The cheaters will head back to the Super Bowl to get whooped by the Seahawks, although I do like the Colts to cover.

Depressing fact: If the Pats do indeed win today, Tom Brady will have more career playoff wins than the Eagles in the entire history of their franchise.

According to a source, several Eagles coaches, some of whom have been coaching football for over a decade, felt that Seattle was the most confident team they had ever seen. According to that same source, the Eagles had an eye on the Seahawks game all season, and prepared for them as much as any other opponent. That extra prep work didn't do Philly much good, as the Seahawks defense held the Eagles to a measly 139 yards (57 rushing, 82 passing) on a paltry 3.1 yards per play.

This is the best team in the NFL, by a significant margin. Here's a list of teams who have repeated as Super Bowl champions: 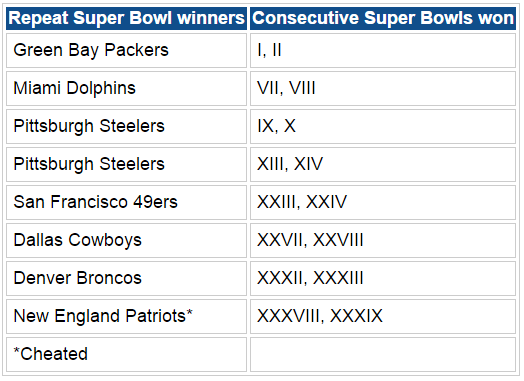 The Seahawks are built for football in January. They have the best run game in the NFL, and by far the best defense. I'd be very surprised if the Seahawks didn't end the nearly decade-long drought of repeat champions. They'll roll today against the banged up Packers.