Construction of Penn's Landing Park postponed by two years to 2023 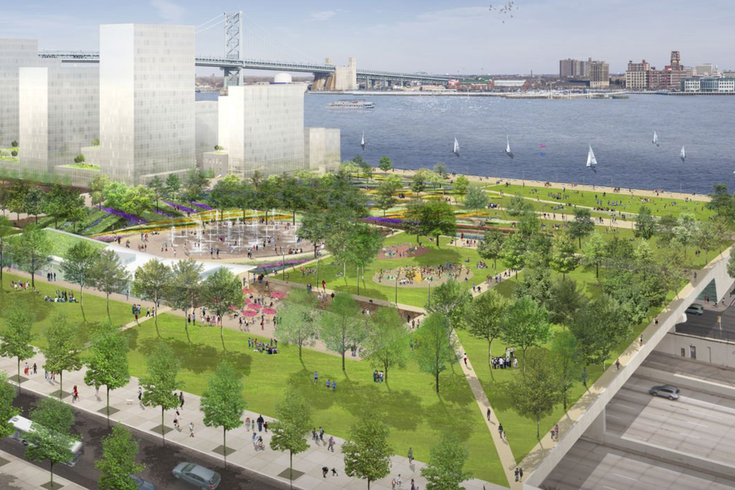 Construction of Penn's Landing Park was expected to begin in 2021.

The much-anticipated Penn's Landing Park that will cap Interstate 95 at the Delaware River Waterfront is going to arrive a bit later than originally expected.

Construction of the 11.5-acre public green space has been postponed by two years to 2023, according to WHYY.

Groundbreaking for the development project was expected to officially begin later this year. But a number of factors, including the COVID-19 pandemic, engineering hurdles and lease and property rights that go back several decades, have caused the delay, PennDOT said.

The Delaware River Water Corporation, which is developing the park alongside Philadelphia and Pennsylvania, said that the project is still in the final design stages. The organization hopes to have updated plans unveiled later this year.

State officials will begin taking bids for the project in late 2022, with construction officially commencing the year after.

The park, which was originally expected to be completed and open to the public in 2024, is now expected to be ready by 2026 – in time for the city's semiquincentennial celebration.

"We want it for 2026," DRWC Executive Director Joe Forkin told WHYY. "We don’t think this is an impediment to that goal. We think it’s a three to three-and-a-half-year construction project."

The $225 million Penn's Landing Park has been planned for several years to reconnect Front Street with the riverfront between Chestnut and Walnut streets.

The vast majority of funding — totaling $205 million— is being provided by the William Penn Foundation, the city and PennDOT. About $4 million more in funding is necessary for the project, a number which the DRWC said will be obtained through fundraising.

Penn's Landing Park is the main piece of the DRWC's Master Plan for the Central Delaware, the forthcoming private and public development of the waterfront's six-mile stretch from Port Richmond to Pennsport. Developers are hoping to transform the area into "an authentic extension of the thriving city and vibrant neighborhoods immediately to its west."

The selected artwork, commissioned through the city's Percent for Art program, "will have the potential to tell the many stories that correlate to the park’s potential to speak to all Philadelphians and visitors with meaning, inclusivity and thoughtfulness," according to developers.

A budget of $700,000 has been allocated for the commissioned artwork at the Delaware River waterfront. A final decision from the developers is expected in the coming months.

The park's construction will coincide with the Durst Organization's $2.2 billion redevelopment plan that was selected last fall by the DRWC among four bids for Penn's Landing. It famously was chosen over a $4 billion proposal for a new arena for the Sixers. The project consists of no taxpayer subsidies.

The Market Street site spans more than seven acres from Market Street to Chestnut Street, while the Marina Basin Site covers four acres from Spruce to Lombard streets. Combined, the projects will feature nearly 2,400 apartments, more than 124,000 square feet of retail space and a 225-room hotel.

The Market Street site includes six towers, complemented by public spaces at Penn's Landing Park and an overlook with views of the waterfront, the river and the Benjamin Franklin Bridge. At the Marina Basin location, the Durst Organization plans another six buildings that aim to blend in with the character and architecture of Society Hill.

The Delaware River Trail is getting a facelift as well. It will run as a two-way bike and walking trail adjacent to Columbus Boulevard from Washington Avenue to Spring Garden Street. And the South Street pedestrian bridge will be extended to the east side of Columbus Boulevard, letting visitors off at the waterfront.