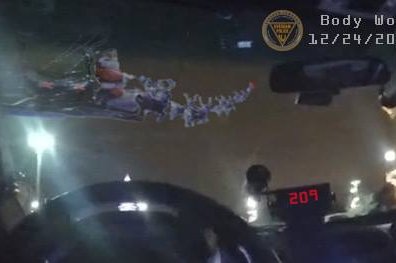 A police officer was startled on Christmas Eve when Santa Claus was observed speeding over South Jersey in his sleigh.

Authorities said officers were responding to reports of low-flying aircraft and suspicious noises on rooftops throughout the night. One officer observed a sleigh "soaring past his police car at 209 mph." He was able to activate his body-worn camera to record the encounter.

On Sunday, the department released a frame from the video of the officer's camera. Time-stamped at 6:58 p.m., the image shows a man wearing a red suit was piloting the sleigh which was pulled by at least eight reindeer.