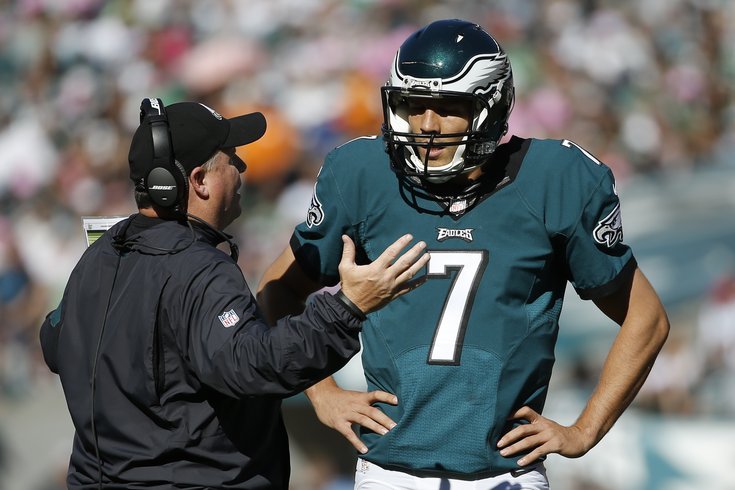 "That red zone interception you just threw was better than the last three, Sam. Good job."

What exactly has Philadelphia Eagles QB Sam Bradford done well so far this season? This was a serious question I posed on Twitter a few days ago, and didn't get much in the way of a reply.

Wrote a negative piece about Sam Bradford this morning. Surprised by objection to it. Question: What has Sam Bradford done well this season?

For the responses to that question, and there are a bunch of funny ones, you can go here.

The most common answer among the Bradford supporters was that his receivers haven't helped him much because of drops, which is true, but still doesn't answer the question that was posed. The most valid answers otherwise were that he hasn't gotten hurt (Woohoo!) and that he has gotten better as the season progressed (although again, that doesn't actually name something he has done well).

In his first press conference after the bye, Chip Kelly was asked a number of times what he thought of Bradford's play, with specifics, and Kelly, much like the people who answered the question above, had nothing. Here's a transcript of his press conference today:

Q. What were your takeaways from evaluating Bradford? Did you see him trending?

Q. Anything further into that about what your takeaways were?

Q. I mean, there is obviously more to it.

CHIP KELLY: Yeah, that's how I feel about it. I think Sam's done a good job.

Q. Is there anything you've seen Bradford progress in from Week 1 in terms of getting better?

CHIP KELLY: Yeah, I think Sam has improved as the season has gone along, yes.

In other words, nobody can name exactly what Bradford does well, but he's getting better at those indescribable actions.