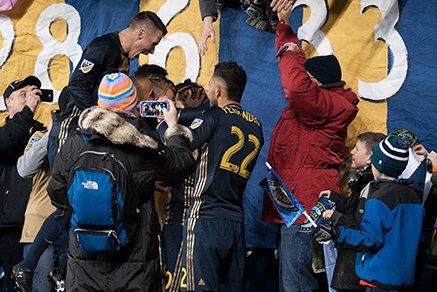 When Tranquillo Barnetta hit his game-winning free kick on Friday night, it was easy to get lost in the dip, swerve, and bend of the ball.

Watch it again, but this time, take a look at the four Union players standing behind Orlando City's wall.

Brian Carroll, Richie Marquez, C.J. Sapong, and Ken Tribbett all start the play in an offside position. When the ball is struck, they're moving forward and bringing themselves parallel with Orlando's wall, which is set 10 yards away from the ball. The goalkeeper is theoretically confused by two different things moving in two different directions.

It's the work of Union assistant B.J. Callaghan, who came across the set piece routine while studying film of Danish club FC Midtjylland.

"I think the premise of it is to try and, one, distract (the goalkeeper), and two, to see if he'll take up a different position to try and find the ball," Callaghan explained. "So if you can extend the wall, will he go a bit more one way, or a bit more the other way? Will that open up a side for the shooter to go? That's why I think you saw us put two players over the ball, and then Tranquillo makes the decision on where he wants to go with it."

The Union tried the routine about 10 minutes earlier, though Barnetta fired over the crossbar. They also gave it a shot in the season opener against Dallas.

But they aren't the only team to poach the routine from Midtjylland.

When you type "offside wall free kick" into Youtube, the first thing that comes up is a goal from Manchester United's Juan Mata in a recent FA Cup tie against Shrewsbury town.

Just like the Union, the Red Devils have a group of players moving toward the ball from an offside position. The goal was widely disputed, but allowed to stand, and former players and pundits went bonkers trying to determine if the play was legal.

Callaghan laughs as he tackles that question:

"Well, I think it's a gray area of, are they actually distracting the goalkeeper? They're far enough away from him. The first time we ran it, (our players) got back onside before the shot. For us, I think there's a gray area of whether you're interfering with the play, or whether you're just standing there as if you were on the wall."

A similar situation happened in 2006, when Youri Djorkaeff scored the first goal for the rebranded New York Red Bulls. In this instance, two players were standing much closer to the goalkeeper, but remained still. The goal was allowed, then later clarified.

This was allowed for one week, then the league corrected the ref. Can't deliberately stand offside on a FK: https://t.co/0i509eZ4RG

More digging on the web brings up this an intriguing article about the Manchester United routine. Manager Louis Van Gaal said his staff determined the play to be illegal when first seeing it from Midjytlland, but he says United consulted with FIFA referees, who asserted that the play was not breaking any rules.

"Our entire staff works very hard on restarts," said Curtin after the 2-1 win. "B.J. Callaghan specifically is the point man. We have a good catalog of things. We’ve spent a lot more time and have been working on them a lot more. The second wall, if you will, the timing of that gives a distraction. It's something we picked up from (Midtjylland) that was successful with it. It provides a little bit of a different look. We checked with the linesman the first time we did it when Tranquillo hit it way over, just to make sure the wall wasn’t offside and there wouldn’t have been an issue. It was good, and the second time they executed it well. We were fortunate to get two fouls from the same look."

Callaghan says this was a specific area that the coaching staff identified this winter and marked for improvement.

"I think, coming off of last season, when we looked back at things, Jim came to us and said, 'Maybe this is an area where we can become better, defending and attacking set plays,'" Callaghan said. "Especially after our start last year, where we were giving up set play goals, (we felt like) we could turn that into a couple of points. I was tasked with spending some time in the offseason putting together a set play 'library', so to speak, which was looking at our own team, looking at other MLS teams, and looking abroad. Midtjylland is known (for that). They have a set play coach, where they give him a certain percentage of their time, and they go ahead and do it. That was a great spot for us to start looking, and it came from there."

So why didn't the Union prioritize restarts last season?

There are probably a bunch of different factors.

First, the entire technical staff process is more streamlined this year. Roles are defined. Earnie Stewart has added structure on the soccer side of things. There is less front office interference.

Second, there are more resources available. There are more coaches and more bodies. The team has a new training facility with new technology. There's a new sports science department. Everything is moving in a direction that allows for more comprehensive preparation.

"There was a lot going on last year, and I think maybe we didn't devote as much time as we should have," Callaghan added. "I think you learn those lessons, and it's always something you look to improve. For us, we look at the idea that there are only a finite amount of points that you can earn, you know? There are 34 games, and that's the only amount of points that are available. Can we find ways to take those points away from other teams? That's just a part of it."