'Who drove the car into the crowd? Hillary's emails?' 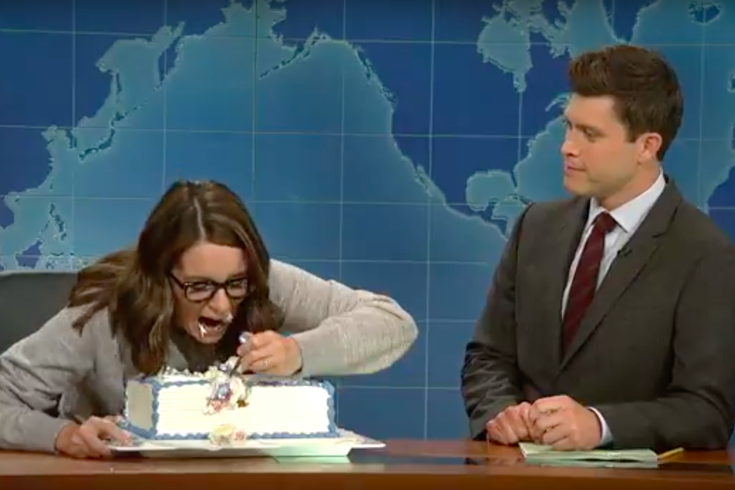 Fey, who hails from Upper Darby, appeared on "Weekend Update: Summer Edition" on Thursday night to share her feelings toward President Donald Trump and the "Unite the Right" rally initiated in opposition to the removal of a statue of Confederate leader Robert E. Lee in Charlottesville, home to the University of Virginia, of which Fey is an alumna.

By last weekend's end, dozens were injured and three were killed. Heather Heyer, 32, died after a car driven by a suspected Nazi sympathizer plowed into a group of counterprotesters.

Trump has spoken on the issue during three separate press conferences over the course of the week and has attributed blame to both sides.

Fey, who has been vocal about her disapproval of Trump in the past, said it "broke her heart to see these evil forces descend on Charlottesville," but offered a solution: sheet caking.

There are a few similar white supremacy rallies planned for Saturday, and while Fey said she hopes participating neo-Nazis and white supremacists will "get the ham salad kicked out of them by a bunch of drag queens," she recognizes that many will be wondering what they can do.

"I would urge people this Saturday, instead of participating in the screaming matches and potential violence, find a local business to support – maybe a Jewish-run bakery or an African-American-run bakery – order a cake with the American flag on it, and just eat it," she said.

Fey then began digging into the cake and unleashed all her feelings, targeting everyone from Speaker of the House Paul Ryan to conservative commenter Ann Coulter.

“When Ann Coulter crawls out of her roach motel and says, ‘Well Antifa attacked Republicans in Berkeley,’ and you’re like, ‘OK, yard sale Barbie. But the other side is Nazis and clansmen, and also, who drove the car into the crowd? Hillary’s emails?'” she said.

"In conclusion, I really want to say to encourage all good, sane Americans to treat these rallies this weekend like the opening of a thoughtful movie with two female leads: Don’t show up," she quipped. "Let these morons scream into the empty air."