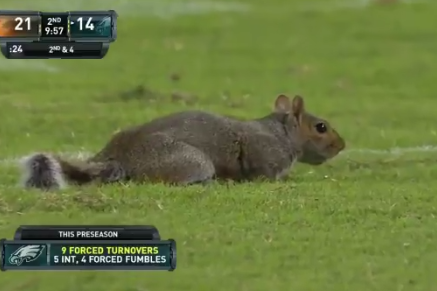 Squirrel jokes – some good, some awful – promptly flooded Twitter as the Eagles went on their way to a 38-31 win over the Miami Dolphins.

Spoiler alert: Matt McGloin inspired many of them.

Here are some examples:

Squirrel has a good motor. Takes a good route to the ball. Impressive. Long shot to make the team but putting together an impressive tape

That squirrel would be the Eagles' second-best cover corner

That squirrel has a higher passer rating than Matt McGloin.

This game is getting nuts. pic.twitter.com/ugfJ7D37hU

Live look at the squirrel after the Eagles have scored 14 straight points. pic.twitter.com/zyI6XFt6u7

This squirrel just got more yards in Philadelphia than DeMarco Murray ever did. #FlyEaglesFly https://t.co/RmqCIt5oaf

BREAKING: Cleveland Browns sign the squirrel. Sources say they were impressed with it's quickness #MIAvsPHI pic.twitter.com/7p5gdL2b8t

This squirrel is in attendance at #MIAvsPHI looking for sleepers for his fantasy team pic.twitter.com/O390M9ykVQ

That squirrel has spent more time on a football field than Kaepernick has this preseason.